We hope you enjoyed your weekend…but, unfortunately, we’re now going to ruin it with all of the bad news that happened under the dome last week (sorry!). 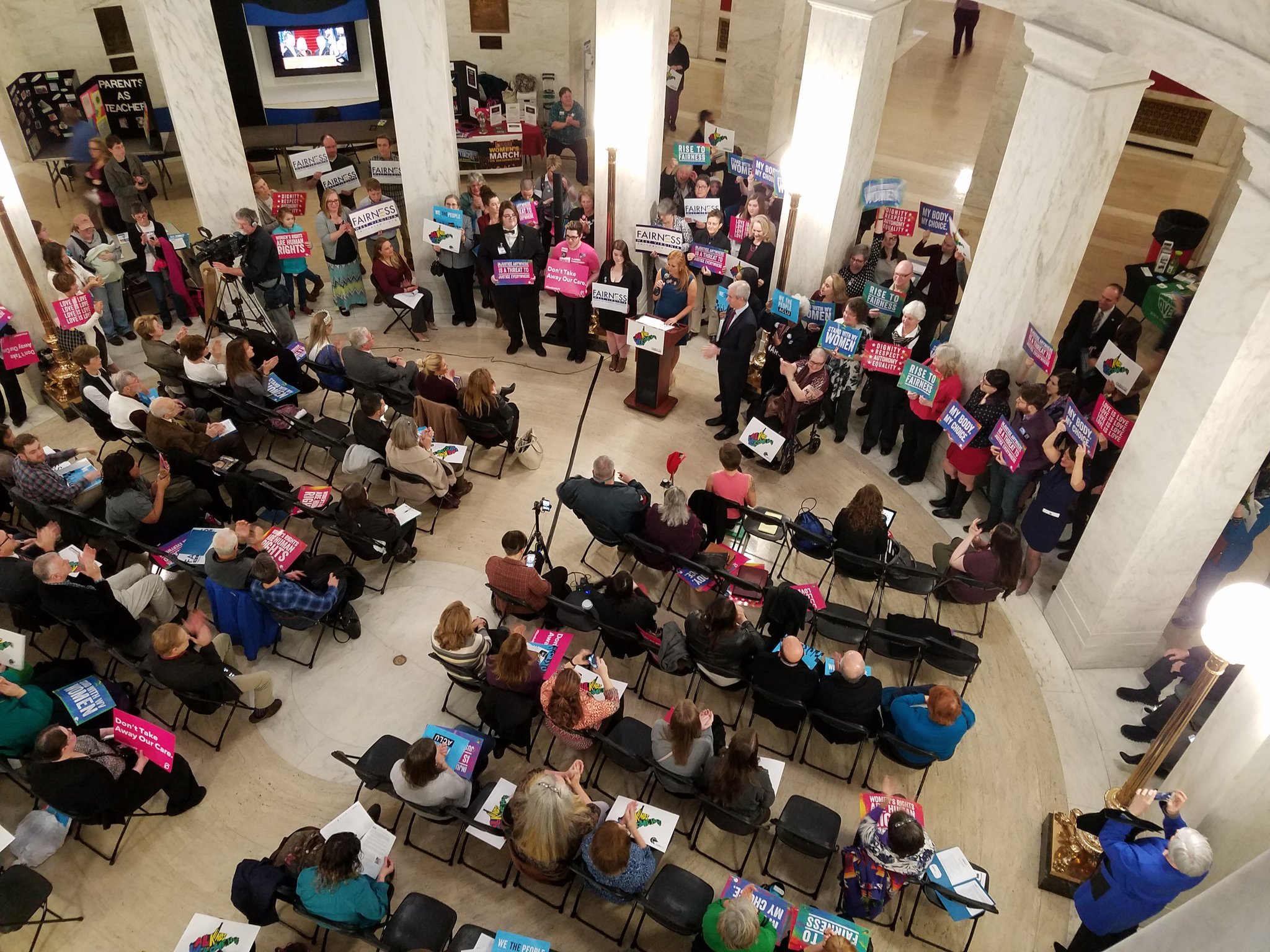 The public hearing on HB 2506, aka the “cancer creek bill”, was on Monday, which also happened to be the WV Environmental Council‘s Annual E-day at the Capitol. The House Chamber was packed with opponents vastly outnumbering industry lobbyists. No one from the public came out to support making our water more toxic. Go figure!

Thursday we watched from the gallery as the House debated HB 2506 for over an hour. Several Delegates gave poignant floor speeches opposing the corporate myths asking their colleagues not to embrace a ten-fold increase in permitted toxins and carcinogens in our rivers and streams. Ohio County Delegate Shawn Fluharty gave an impassioned speech (@ 3:08:00 on this WVPB video) opposing HB 2506 saying it was sold as a jobs bill but no data exists as to what, where, or how many. He admonished the House not to fall for it; saying he’s “…not going to drink the corporate Kool-Aid; we’d like to drink the water decades from now.”

In the end, the majority of Delegates did indeed “drink the corporate Kool-Aid” and passed the bill. HB 2506 is now in the hands of the Senate Judiciary committee. Call your senator(s), Senate Judiciary Committee Chairman Trump, and members of his committee and tell them to vote NO on HB 2506 and putting more toxins in our rivers and streams. Refer to this CDC chart showing that our state already has the 4th highest cancer rate in the nation! Ask them how many of their constituents have called in to support dirtier water?

On the last Saturday in February, hundreds of healthcare activists assembled outside the Cultural Center to rally in support of the Affordable Care Act and for keeping those newly covered by the federal law with their health care coverage. West Virginians for Affordable Health Care, WV Healthy Kids & Families Coalition, WV CAG, and others were calling on our Congressional representatives to hold town hall meetings so they can explain how a repeal and replacement of Obamacare will still keep everyone covered. We live-streamed the rally on Facebook, including the citizens who shared their personal stories. The rally is in two parts since Ciera’s phone battery died and she then had to borrow mine – oops!

WV CAG is working with other groups to invite our Senators and Congressmen to series of Save Our Care town hall meetings. The one in Charleston is back at the Culture Center on April 19th. For more details, click here. Until then, keep calling Congress and tell them you want to keep your health coverage!

In a more professional venue, HBO comedian John Oliver aired a funny and informative piece on the pitfalls of Republican’s efforts to do away with the ACA. He calls out their “bait and switch” proposals of block grants, medical savings accounts, and high risk pools instead of the guaranteed coverages of the ACA. Truth in humor…but with a warning – Oliver’s piece contains occasional profanity (which in this case is well-deserved).

All Kinds Are Welcome Here

Thursday was the All Kinds are Welcome Here Civil Liberties Lobby Day. WV CAG joined with the ACLU of WV, Fairness WV, WV FREE, and 32 other groups in holding a press conference, rally, and constituent meetings.  The lobby day was attended by over 400 citizens standing together to share the message of inclusiveness and acceptance. It was definitely the high point of the session so far – good energy, great people, and positive messages. This is what democracy looks like!

This week’s featured partner is the American Civil Liberties Union of WV. They were one of the groups we worked with to pull off the Women’s March on WV at our state Capitol in January which garnered over 3,300 attendees. ACLU has been around protecting our civil rights for a long time and is there for us for the long haul. We’re lucky to have such an active and robust local chapter of this national organization here in West Virginia!

On April 4th, we’re joining with ACLU to host a screening of the classic movie 1984 at Park Place Cinemas in Charleston. Groups around the country will be showing the film on April 4th, as that is the date the dystopian story begins. Big Brother will be watching. Will you?

Stand UP, Fight BACK!

That was the title of the town hall meeting we held right after the election last November. Ever since there has been a regular string of rallies, protests, meetings, and trainings where you, the citizen activist, have come out in record numbers! Your activism is the silver lining on the storm clouds that are raining such horrible public policy down on us right now. We can’t fight this toxicity alone, and we can’t fight this fight without fully engaged citizens showing up in mass. Keep it up!

The other way you can be a part of this renewed movement for sanity in government is by becoming a member of WV Citizen Action Group and/or making a tax-deductible donation to our sister organization, WV Citizen Action Education Fund. Rallies and protests keep us all jazzed and speak truth to power, but your memberships and generous donations help pay for phones, copiers, and other essential support infrastructure. We can’t thank you all enough for your support!

This week saw the introduction of bills to repeal the WV Supreme Court of Appeals Public Campaign Financing Program (SB 463) and impose strict identification requirements in order to vote (HB 2781). The voter ID bill would also eliminate automatic voter registration (AVR) at the Division of Motor Vehicles. We need your help to keep these terrible proposals from moving forward!

In 2010, following a series of scandals involving sitting justices and major campaign contributors, our legislature voted to provide an alternative option to the way we finance judicial elections, recognizing that we needed to restore confidence in our state Supreme Court.

Unfortunately, in response to record spending by outside groups in the 2016 election, a misguided group of State Senators want to repeal the public financing program because they say it isn’t working. There’s no denying that third party spending on attack ads is a problem. However, repealing the public financing program because this past election saw a flood of secret outside money is like blowing up a dam during a real flood because water is pouring over it.

The program is working as intended, giving qualified candidates for the court the ability to run without having to rely on contributions from lawyers and special interest contributors who frequently have cases before the court, and providing a pathway to the bench for those who aren’t independently wealthy. Rather than repealing the public financing program, we should work to bolster the independence our judges against big-money influence from out of state special interests with common-sense disclosure and transparency laws like SB 64.

The attempt to repeal public financing is not the only attack on democracy introduced this week. In the House, several delegates have introduced a bill that would repeal the automatic voter registration (AVR) provisions enacted as a compromise to last year’s voter ID law, and further restrict voting rights by eliminating several forms of identification that would be accepted when the goes into effect next year.

Why do these legislators want to keep people from voting? Voter ID is just targeted voter suppression!

Please contact House Judiciary Committee members and your delegate(s) and tell them to protect AVR and oppose these shameful, unnecessary restrictions that make it harder for eligible voters to cast their votes.

AVR and West Virginia’s participation in the Electronic Registration Information Center (ERIC), will help ensure our voter rolls are accurate. Errors in the voter rolls aren’t a sign of voter fraud; they’re a sign we need to improve our voter registration system. We should be be making it easier to register and vote, not harder.

SB 480, the Local Energy Efficiency Partnership (LEEP) Act has been introduced in the Senate and referenced to the Senate Government Organizations Committee.  Email committee members NOW to ask them to support this bill!

Energy efficiency is good for our economy by creating jobs, improving our buildings, and making it easier for our businesses and families to stay in West Virginia. Energy efficiency jobs pay for themselves through utility savings.

The LEEP Act is the top legislative priority for energy efficiency in the state. LEEP is a funding mechanism that empowers commercial building owners to make their buildings more efficient and pay for the upgrades on their tax ticket. The upgrades are funded by privately held bonds that are backed by the energy savings, so no county or state revenue is involved.

Contact committee members now and urge their support for SB 480!

How would you balance the budget?
by:  Tara Martinez, WV Center on Budget & Policy

As you know, the West Virginia Legislature is once again facing a massive budget shortfall. Lawmakers have tough decisions to make as they work to bridge a $500 to $600 million budget gap.

How would you balance the budget? Through revenue enhancements? Would you cut programs and services? Do you think you could put West Virginia on a track toward a revenue surplus? Now you can try your own hand at balancing the state budget with this Protect West Virginia Budget Calculator!

Once you balance the budget, let your lawmakers and friends know how you protected West Virginia. You can send lawmakers a message through Protect West Virginia here and let them know there are other options than dismantling the foundations of vibrant communities!

Want to take your action a step further with an op-ed or letter to the editor? Contact me at tmartinez@wvpolicy.org for assistance. 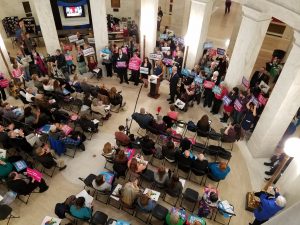