We need to restore balance to our democracy, attract qualified people who want to go into public service, and make sure every vote is counted and everyone’s voice is heard.

Our elected officials should be ensuring trust and confidence in the electoral process, protecting and strengthening the freedom to vote, and promoting integrity and accountability from our elected officials. Instead, the WV House of Delegates has passed a number of bills that only serve to sow mistrust and discourage participation in democracy. They are a recipe for confusion if they become law just two months out from the primary election.

The 2020 election in West Virginia was a success by any rational measure. During an unprecedented pandemic, people used expanded voting options to achieve the second highest turnout in the state’s history. Voters made clear decisions, and contests were decided honestly, without controversy, and with no hint that fraud affected the outcome of any race. Instead of embracing the approach that led the state, their own party, and themselves to success, Republicans in the House of Delegates have made it a priority to pass bills designed to exploit the ridiculous lie that the 2020 election was stolen.

One of these offensive bills, HB 4293, targets and punishes election officials and others for simply helping people exercise their right to vote by criminalizing the distribution of a public document available for download from the Secretary of State’s website. According to the bill’s sponsors, the purpose of this bill is to “prohibit the delivery of unsolicited absentee ballot applications to any person who has not specifically requested one,” by making it a crime “to mail or deliver an application for an absentee ballot to any voter except when specifically requested by that voter.” Those found guilty would be subject to a $500 fine and up to six months in jail — for providing someone with a copy of an absentee ballot application, that would then be reviewed and approved by election officials before an actual ballot would be mailed to eligible registered voters.

HB 4293 takes aim at the few county clerks who made the decision to mail applications to all the registered voters in their counties ahead of the 2020 general election, after the Governor and the Secretary of State’s Office refused to mail the applications to all registered voters as they did for the 2020 primary election. It also applies to any individual who “mails or delivers more than 10 applications for an absentee ballot to a group of voters without the specific request of those voters.” HB 4392 is a solution in search of a problem designed to penalize county clerks and others from distributing absentee ballot applications to voters, and will have a chilling effect on those who work to encourage voting.

Another bill, HB 4311, increases penalties for illegal voting in an election, turning current misdemeanor crimes into felonies subject to a fine of up to $10,000 and 10 years in prison. The bill addresses individuals who attempt to vote twice or somewhere they aren’t eligible. This rarely happens. Influencing the outcome of an election through this type of fraud would require a large, organized conspiracy, which is already illegal. Similar bills in other states have led to scapegoating people who were just trying to be responsible citizens and fulfill their civic duty but misunderstood where they should vote or were unfamiliar with eligibility requirements.

Other bills that sow mistrust and discourage participation include HB 4419, which would allow more money into our elections by raising the amount of money candidates and party caucus committees can contribute to state party and affiliated executive committees. (Apparently raising the limit from $1,000 to $10,000 per calendar year in 2019 didn’t go far enough.) Under the current version of the bill, candidate committees and caucus committees will be able to make $75,000 contributions to party committees. HB 4419 also removes the cap on coordinated expenditures by party committees, allowing them to spend unlimited amounts on their party’s nominees in the general election.

Finally, having to run a statewide campaign and go before voters in November is apparently a deterrent to recruiting applicants to fill a seat on the State Supreme Court following the resignation of former Justice Evan Jenkins. This is the most recent excuse for HB 4785, which would remove an important check on the Governor’s appointment power to fill judicial vacancies.

Considering how expensive and politicized judicial elections have become, it’s understandable that qualified candidates might find the process of running for office distasteful. However, there are other solutions to this problem that don’t involve taking power away from voters. We deserve to have a say-so on our courts, and there are powerful tools we can use to ensure that judges aren’t merely politicians in robes. For example, strengthening recusal rules and disclosure of political spending can help avoid conflicts of interest while promoting judicial independence and accountability.

Our state Supreme Court frequently has the final say on critical issues like education funding, access to healthcare, worker protections, neighborhood safety, and the quality of our air and water. The stakes for regular West Virginians are far too high to risk the kind of judicial power grab proposed in HB 4785.

We need to restore balance to our democracy, attract qualified people who want to go into public service, and make sure every vote is counted and everyone’s voice is heard. As it stands, wealthy special interests have too much power in deciding who can run for office, and what policies our representatives will consider once they are elected. These Republican bills to restrict access to voting, allow more money into and seize power over our elections will only sow mistrust and further discourage participation. Changing the rules about who can vote, how they can vote, who can offer assistance, and even who they can vote for is a recipe for confusion this close to an election. The Senate can, and should, reject these proposals.

Contact your Senators and urge them to oppose these bills.

Election Bills are a Disservice to West Virginia Voters 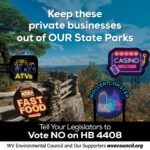 Environmental Update: The good and bad of CROSSOVER DAY! 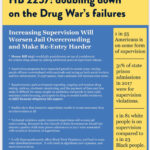 Let’s get two good bills over the finish line!

Urgent Action: Tell our Senators to Stop HB 4007 – No Tax Breaks for the Wealthy on the Backs of Working Families
West Virginia Citizen Action Group Blog © 2015 Frontier Theme
Send this to a friend