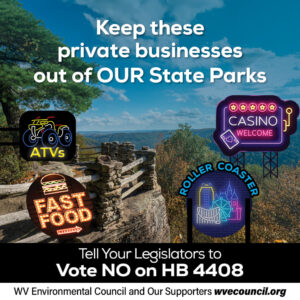 IMMEDIATE ACTION NEEDED!!!! Companion bills HB 4408/SB 485 expanding private companies’ ability to develop recreational facilities were voted on in their respective committees last week.  The House version is moving at lightning speed and is up for third reading and final vote TODAY, Monday, Feb. 28. This bill would privatize development in our state parks and forests, allowing casinos, mountain roller coasters, ORV trails; 50 year leases; and increased fees. Tourism dollars help our state, but we shouldn’t allow a free-for-all on public lands. Please go here and tell your legislators to vote NO, immediately!!!

The WV Rivers Coalition held a mid-session update on Thursday night, which focused on the above bills, along with two other important pieces of legislation.

HB 2598 – Remember when 300,000 West Virginians in nine counties had their water contaminated by a toxic chemical leak? Apparently our Legislature either has a really short memory, or they don’t care. The original Aboveground Storage Tank Act gets weakened almost every session, and this year’s attack is HB 2598. It caters to the oil and gas industry by relaxing inspection requirements for oil and gas waste tanks located in zones of critical concern – the tanks just upstream from drinking water intakes. HB 2598 passed in the House and is single-referenced to the Senate Energy, Industry and Mining Committee. You can read the fact sheet here.

SB 480 increases funding to boost the number of oil and gas inspectors by requiring an annual $100 fee on higher-producing wells. Last week it passed the Senate and moved to House Finance. However, according to this article in Sunday’s Charleston Gazette-Mail, “Sen. Randy Smith, R-Tucker, said Thursday there was no interest in advancing SB 480 in the House of Delegates.” Now Sen. Smith is hoping to pass previously-shelved SB 613, which raises funds through other means. If funding is not increased, the Office of Oil and Gas risks running afoul of Federal regulations.

It was a busy week on the environmental front, with other regulations and funding at the Department of Environmental Protection being addressed by additional bills:

The Division of Air Quality also has a shortage of inspectors and the House approved HB 3082 to remedy the problem for the second year in a row. It allows investment in certain funds in order to make up for lost revenue, but the future may be bleak in the Senate.

HB 4758, which passed the House, would allow the DEP to comply with a federal mandate to accurately track mine reclamation liability. Here’s an article from the Gazette-Mail.

A couple of bills that benefit the oil and gas industry are moving quickly. SB 650, eliminating the number of royalty owners needed to develop a tract, passed the Senate without discussion. And a complex, sweeping bill (SB 694) addressing application requirements, regulation, and compensation options for horizontal wells left the Senate Finance Committee for the floor. There are still questions about the details, as explained in this Gazette-Mail article, and portions may be controversial among environmentalists, pitting forced pooling detractors against those who see fewer holes in the ground as an improvement over multiple wells.

Finally, if you’re still with me, the Legislature has once again shown that their take on being pro-coal means supporting operators, rather than the miners who risk their health and lives on a daily basis. The full House will soon vote on HB 4840, which strips the WV Office of Miners’ Health, Safety and Training of the power to issue orders and fines for safety violations, eliminates permit fees and mine inspections, and a whole host of other horrible actions. UMWA spokesman Phil Smith was quoted in the Gazette-Mail saying, “We are completely opposed to this insult to West Virginia miners and especially to their families, who have a right to expect them to come home safe and sound at the end of every shift.”

Read the report about this awful bill here, then call your legislators and tell them that they need to protect WV coal miners, not cater to mine operators. 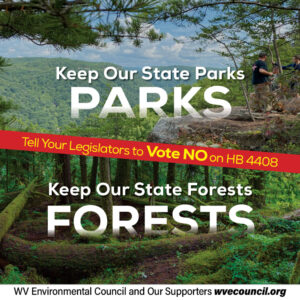 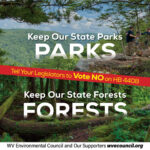