Show up and speak out to prevent West Virginians from having to bail out FirstEnergy and its shareholders!

Join us for pre-hearing rallies outside each location! Here are the locations and dates to make public comments on FirstEnergy’s bailout attempt:

A similar transfer of ownership of the Harrison power plant in 2013 has cost West Virginia ratepayers more than $160 MILLION so far. Our expert says the Pleasants deal will likely cost WV ratepayers more than $400 MILLION over 15 years. If FirstEnergy gets its way, Mon Power and Potomac Edison customers will be on the hook for the $400 million and pay higher rates.

If Pleasants was really as profitable as FirstEnergy claims, our expert says, then the company wouldn’t be selling the power plant.

Show up, speak out and tell the PSC to say “#NoWVBailoutForFirstEnergy.” 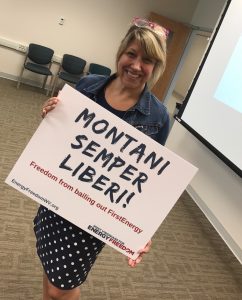