Legislative sessions are like a snowball rolled down a steep, snowy slope. They gain speed, momentum and size as they roll… this one is no different.

The Senate now has 406 bills introduced and the House 846. Committees are now passing out bills to the floors of their respective chambers, and both the House and the Senate are beginning to send their completed legislation over to the other body for consideration. Twenty-one bills have passed in the House. The Senate has outdone them by passing twenty-five.

However, this is only the beginning of the process because rarely does a bill coming over from the other chamber get approved without any amendments. When a House bill is amended by the Senate, it then has to go back over to the House for either concurrence, further amendments, or a call for a “conference committee” made up of members from both bodies selected by their leadership to hash out the differences. Then, once again, the bill goes back to each side for another vote. Such is the sausage making process of government…

The House Health Committee passed out HB 4001 that would require certain recipients of SNAP (food stamps) to work at least 20 hours per week and subject all members of their household to monthly asset testing. This is an excuse to throw folks off SNAP which is exactly what happened during the pilot project. HB 4001 is one of those ‘penny wise/pound foolish’ ideas that, while perhaps sounding good on paper, actually ends up costing the state more to administer and enforce than it saves. Instituting massive multi-million dollar programs to police recipients getting at best a couple hundred dollars a month in food stamps is a total waste of tax dollars, and worse leads to increased hunger and longer lines at food pantries and soup kitchens. This ‘Hunger Games’ bill is now before the House Judiciary Committee. If your Delegate is on this committee ask them to deep six this bad policy just like last year.

HB 4014 sets out to break up the state Department of Health & Human Resources (DHHR) into four separate agencies, each with its own Secretary and adding 8 new Commissioners. Aren’t Republicans supposed to be for smaller government?

Sure DHHR has lots of problems, but this isn’t targeted surgery, its butchering. This is a terribly thought out bill that came out of the legislative interims without any public input. It should just die a quiet death but that’s not to be. Check out this excellent op-ed by activist Betty Rivard and watch for updates and action alerts to keep DHHR from being drawn and quartered.

Compassion Calls Us Day at the Legislature – January 31, 2018 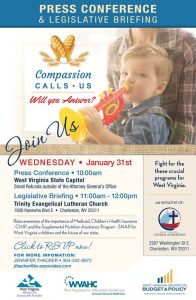 The West Virginia Council of Churches (WVCC) is sponsoring its first Compassion Calls Us Day at the Legislature. For several years, the Council has been urging that we move away from the language of ideology and economy towards the language of the common good. This year’s Compassion Calls Us Day at the Legislature will include an Interfaith Press Conference at 10:00 a.m. at the Little Rotunda (near the Attorney General’s office) at the State Capitol and a Legislative Briefing at 11:00 a.m. at Trinity Lutheran Church, located at 1600 Kanawha Blvd E, Charleston, WV 25311.

Speaking of the WVCC, we were deeply saddened to learn of the passing of the Council’s former director, the Rev. Dennis Sparks. During his tenure, Dennis was a fixture at the State Capitol using his position to fight for social justice, economic, and environmental justice and we’re honored to have had the opportunity to have known and worked with him. He’ll be sorely missed.

Senator Capito will be joining the GOP leadership retreat at the Greenbrier on Feb. 1 where they’ll be discussiong their priorities for 2018. Let’s send her a message to put West Virginia over Washington, and people over profits for the 1%. The rally is 3-4:30 PM on the Wednesday, January 31 outside Senator Capito’s office at 500 Virgina Street East in Charleston. Several bus loads of activists coming in for an action at the Greenbrier the next day will be joining us! 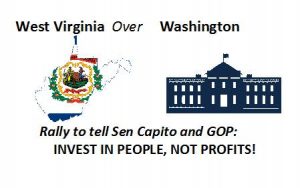 Trump will present his State of the Union address the day before (January 30) and we’re hearing he’ll be proposing cuts to Medicaid and other social programs that help people survive. Join us in Charleston to send this “Invest in People” message from West Virginia to DC, then ride the bus to the Greenbrier the next day to stand with hundreds of Americans coming from around the countryto remind GOP leaders of OUR priorities. We want a government that works for the common good – for all of us, not just a wealthy few. Sign up here: https://www.facebook.com/events/384572615288259/. The bus will be leaving Charleston at 9am on Thursday, February 1 and returning that evening around 6pm.

Return of the Textbook Wars?

The House passed HB 3089 this week that gives individual counties “flexibility” in choosing textbooks both paper and electronic for meeting the state’s educational requirements. The Gazette-Mail had this quote from Delegate Larry Rowe (D-Kanawha): “By having it open to the [county] school boards to select, we may have a pattern of teaching across the state that’s not uniform, that’s very different and may be contradictory and subject to a political process with the three members of the board being elected.”

What could possibly go wrong? Climate denial? Evolution vs. divine order? Back in the mid-70s, what’s called the textbook wars broke out in Kanawha County. Fundamentalists objected to the new set of books approved by the state school board to introduce ‘multicultural’ aspects into the state curriculum. With the state having to frequently take over running local county school systems due to various deficiencies, why would we interject county-by-county selection of textbooks into the mix?

SB 284 that would provide state support for students entering Community College passed out of Senate Education this week and is up for second reading on the floor on Monday. Second reading is the time that floor amendments can be proposed to a bill. This governor’s bill, supported by the Senate president, is still a work in progress and has a lot of details still to be ironed out as it moves through the session. While it has the potential to be one of the bright spots this session, some education experts are weighing in the bill’s flaws, including a residency requirement that recipients stay in West Virginia for at least two years after they graduate, as well as a drug testing requirement to maintain eligibility. Also, officials from several of the state’s four-year colleges and universities have expressed concerns about how the bill will impact them and the need to provide the same level of assistance for those who choose to pursue a four-year degree. We’ll continue to follow its progress.

WV AFL-CIO held its ‘Labor Day’ at the Capitol this week with their focus on improving the lot of public employees and teachers who are the lowest paid of any of our surrounding states. “Our checks go down every year,” commented WV American Federation of Teachers president Christine Campbell in her five minute speech at the AFL-CIO’s press conference (fast-forward to the seven minute mark on the video link). She’s referring to yearly increases in PEIA health insurance premiums and deductibles without any pay increases that leave teachers and public workers with a net loss of income. The American Federation of Teachers-WV and the WV Education Association are now so frustrated with this yearly loss of pay that rank and file members are now openly talking with leadership about the need for a teachers’ strike if this legislature fails to address their concerns. On a hopeful note, the Governor’s bill to up pay by 1% is moving and has been amended to add up to five yearly 1% increases. Stay tuned. 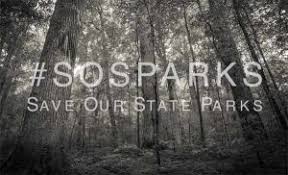 In a surprise move that pits agency heads at loggerheads, our Agriculture Commissioner Kent Leonhardt officially denounced this hair-brained proposal by ‘Woody’ Thacher, head of the Development office this week. This op-ed is a good example of the short-sightedness of logging state parks to pay for repairs. In comments on Legislature Today, the head of the Division of Forestry didn’t have a clue there could be any problems – he even asserted that logging in Ohio’s state parks actually attracted more visitors! Call the Governor at 304-558-200 and tell him cut down SB 270, not the State Parks!

If you’re getting tired of all the four-color, glossy, over-sized, campaign mailers (oops we meant ‘constituent communications’ paid for by your tax dollars) arriving on a nearly weekly basis from our MIA second district Congressman, you might be interested to hear about his challengers.

Aaron Scheinberg filed this week to challenge Talley Sergent in the Democratic Primary for this congressional seat. One of them will emerge to challenge Republican incumbent Mooney in November, who is so far unchallenged in his party’s primary.

Filing for all candidates is now over. However, the official lists will come out mid-week after Saturday’s mail arrives at the Secretary of State’s office. Filings postmarked by the January 27 will still be entered on the official list.

Browsing Facebook Sunday morning while drinking coffee and what appears? A screenshot of the official candidate filing of none other than David Grubb, founder of WV Citizen Action Group! David has thrown his hat into the ring for the WV State Senate, vying with other primary hopefuls to go up against state Senator Ed Gaunch (R-Kanawha) in the November. David previously represented Kanawha County in the State Senate in the mid-1990’s after serving two terms in the House of Delegates.

Your Support Makes These Updates Happen

Each legislative session is our busiest time of year. Your member renewals and contributions keep us going through the 8 AM Monday morning public hearings and the 10-11 PM committee hearings that have become more common as the conservatives try to pass as much of their agenda through as they can before November elections. Please take a minute give a tax-deductible donation or renew your membership. Thanks in advance!