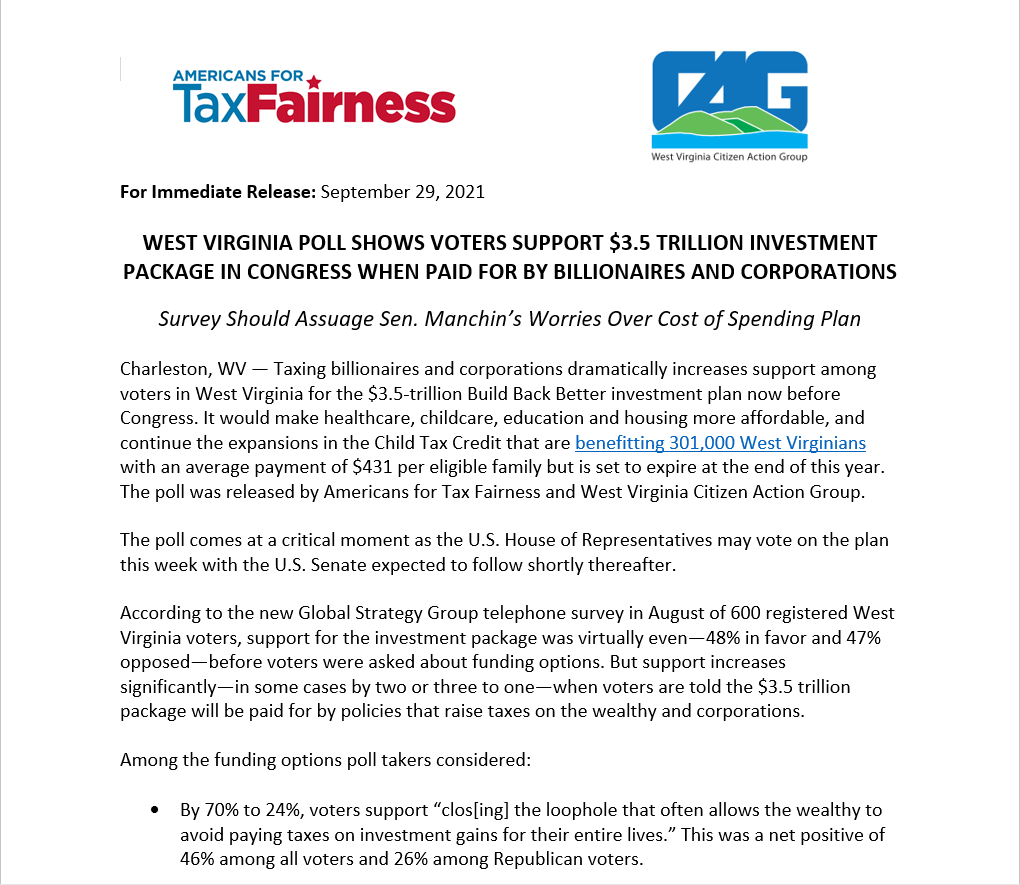 Charleston, WV — Taxing billionaires and corporations dramatically increases support among voters in West Virginia for the $3.5-trillion Build Back Better investment plan now before Congress. It would make healthcare, childcare, education and housing more affordable, and continue the expansions in the Child Tax Credit that are benefitting 301,000 West Virginians with an average payment of $431 per eligible family but is set to expire at the end of this year. The poll was released by Americans for Tax Fairness and West Virginia Citizen Action Group.

The poll comes at a critical moment as the U.S. House of Representatives may vote on the plan this week with the U.S. Senate expected to follow shortly thereafter.

According to the new Global Strategy Group telephone survey in August of 600 registered West Virginia voters, support for the investment package was virtually even—48% in favor and 47% opposed—before voters were asked about funding options. But support increases significantly—in some cases by two or three to one—when voters are told the $3.5 trillion package will be paid for by policies that raise taxes on the wealthy and corporations.

“These clear and startling results should reassure Sen. Manchin that he’ll be serving his constituents well by backing a $3.5 trillion package of working-family investments fully funded by fairer taxes on the rich and corporations,” said Gary Zuckett, executive director of West Virginia Citizen Action Group. “Sen. Manchin has expressed reservations about the price tag because of concerns over rising debt and inflation. But both problems can be avoided if the package is paid for with the kind of higher taxes on the rich and corporations this poll shows West Virginia voters all along the political spectrum strongly support.”

“At various times Senator Joe Manchin, a key swing vote on the Build Back Better plan, has raised concerns about how these investments can be paid for,” said Frank Clemente, executive director at Americans for Tax Fairness. “President Biden has offered a plan, and this poll shows that West Virginians strongly endorse his method: by making billionaires and corporations begin to pay their fair share of taxes. U.S. billionaires increased their total wealth by $1.8 trillion, or 62%, over the last 17 months, according to our analysis of Forbes data. That’s more than half of the total cost of the Build Back Better plan over 10 years. We can afford this plan.” 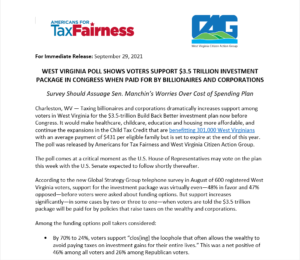