Trump Visits GOP at Greenbrier – We Visited Too

After 10,000 protested the annual GOP winter retreat in Philadelphia in 2017, it seems they decided to head for the mountains this year, the mountains of West Virginia, White Sulfur Springs and the elegance of Jim Justice’s Greenbrier Resort. Remember, this is the location of the Cold War bunker built for Congress so it has an Amtrak station across the street. Last week, WV-CAG worked with the new WV Working Families Party and our national, People’s Action plus the Center for Popular Democracy to bring a message of #HandsOff our Medicaid, Medicare, Social Security, Dreamers, public lands, ect. The Beckley Register-Herald had the best local coverage online including a 5 minute video of the march and interviews with many of the 450+ protesters marching in this town of 2,400 residents. 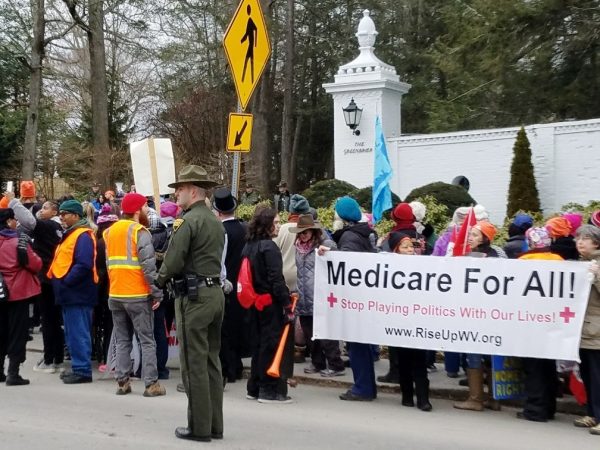 To kick-off the Greenbrier protest we invited several busloads of activists who were spending the night before in Charleston to join us outside Sen. Capito’s office for a rally and delivery of a letter asking her to oppose cuts to Medicaid, SNAP, and other life-giving social services. Maybe next year they’ll go to Montana…

The Senate unanimously passed the governor’s 1% pay raise for teachers on Friday as over a thousand of them filled the main floor of the Capitol from the doors of the Senate to the doors of the House Chamber. The previous day, amendments offered by Senate Democrats to raise teacher pay by 3% were voted down. Teachers and other state employees are fed up with pay scales at the bottom of the national list and ever increasing costs for PEIA health insurance that, in reality, translates into yearly pay cuts. The 1% offered by the governor doesn’t even cover this year’s increases in PEIA let alone previous increases. No wonder we have so many unfilled teaching other state positions. Hopefully, the House will up the ante when SB 267 is considered by that body.

Besides the teachers protests over low pay and health care, the ‘Paycheck Deception’ (SB335) bill is moving again this year, and will up for a vote by the full Senate later this week. This punitive legislation is being pushed as another way to weaken organized labor by making it harder for them to collect dues from their membership. As it is now, a member signs a payroll deduction card with their employer and their dues regularly deducted until such time as the member should change jobs or decide to quit the union. The so-called ‘paycheck protection’ bill would require labor organizations to have each member redo this deduction card every year – amounting to useless busy work designed to drain the already limited resources unions have to fight for workers and provide service for their members.

On the brighter side, a bill that gives West Virginians the option of attending community and technical colleges for free passed the Senate 33-0. However, SB284 includes drug-testing each semester and a pay-back provision if the graduating student leaves the state within two years. Also questions still remain about how the bill will affect the health of the state’s four-year colleges and universities. The bill still has a long way to go. It has to make it through the House Education and Finance committees and be passed by the full House (with any House amendments needing approval by the Senate) before it makes it to the governor’s desk.

In other Senate action, the Senate Judiciary Committee spent several days debating the merits of an Intermediate Court of Appeals (SB 341), before sending a bill establishing the new court on to the Senate Finance Committee. Aside from the discussion as to whether the an intermediate court of appeals is needed, much of the debate in the Judiciary Committee also centered around how the judges on the new court would be selected. As it currently stands, they will be appointed by the governor with the consent of the Senate, although our current Supreme Court justices and other members of the judiciary are elected to their various terms by a vote of the people. Significant questions also remain about cost and no fiscal note has been made available yet.

The Judiciary Committee followed up its Intermediate Court debate with consideration of a resolution (SJR 3) proposing a constitutional amendment to give the Legislature oversight of the judiciary’s budget. The proposal comes in response to reports of frivolous spending on renovations at the State Supreme Court, including the purchase of a $32,000 couch. Recognizing the potential for retaliation against the Court, the committee did include language that would prohibit the Legislature from conditioning an increase or decrease in funding on decisions arrived at by the Court.

SB 341 and SJR 3 still have several hurdles to clear and will have more on these in future updates.

Department of Education and the Arts on Chopping Block

Gail Manchin, wife of Senator Joe Manchin, is head of this deparment that GOP lawmakers have been trying to kill off for the past two years. This leads to the question of why? Many think it’s just a political hit. Supporters say its to make government more efficient. The House passed it and left its fate for the Senate to decide.

HB 4014, reorganizing the Department of Health and Human Resources (DHHR) is expected to be on the agenda in House Health Committee, possibly as early as their Tuesday meeting. We understand that the bill has been rewritten so that only the Inspector General, the Department’s investigation and reporting arm intended to ensure the fair, accurate and nondiscriminatory delivery of benefits and services, and the Bureau for Behavioral Health and Health Facilities are taken out of the DHHR, but we don’t know for sure what all is in (or out of) the committee’s new draft bill. Stay tuned for more on this effort to break up the DHHR.

As of this writing, HB4001, which would require certain recipients of SNAP (food stamps) to work at least 20 hours per week and subject beneficiaries of other safety net programs to monthly asset and eligibility testing is still parked in the House Judiciary Committee. The next step will be the public hearing. We will need as many people as we can get there for that once it is called, we won’t have much notice, and we are hearing (no pun intended) that this is going to be the week for that.

While we are waiting, keep those calls to House Judiciary Committee members coming. Also please check out and share this powerful post from the WV Food and Farm Coalition. It is the pinned post at the top of their Facebook page:

Making it Legal to Noodle Catfish?

Who knew it was illegal to ‘noodle’ catfish? Who knew what noodling a catfish was before SB 416 was introduced? This bill provides that, “noodling, or fishing for catfish using one’s bare hands,” would now lawful. What a relief! Another government regulation may bite the dust! However, Missouri DNR prohibits this practice as it disturbs the fish while it is protecting its eggs and it leads to diminished reproduction of a valuable game species. We’re rooting for the catfish!

Preacher Protection Bill is all Fluff

Charleston Gazette-Mail columnist Phil Kabler’s previous Sunday commentary was entitled, “Lawmakers not Focusing on What’s Important.” HB 4010, which just passed the House, was among the bills on his list. It ‘protects’ members of the clergy from being prosecuted for refusing to marry individuals whose nuptials go against the minister’s religious beliefs. Never mind that we already have these protections in our constitution, they just want to make sure. Or is it they need to be able to go into the election this fall with some red meat for their base? Regardless, much too much of this fluff is appearing this year while critical governing issues are wanting attention.

Speaking of the Gazette-Mail, one of the bombshell stories of the week was that the paper has filed for bankruptcy and is now up for sale. It’s especially disheartening to see the Gazette fall victim to the economic ills plaguing print journalism around the country. The paper has provided an invaluable service to West Virginia and its people ― holding politicians and corporations alike accountable with its hard-hitting investigative reporting, which was rewarded last year with a Pulitzer Prize. This a developing story that received considerable local, as well as national coverage in the New York Times. We join the Gazette’s editor emeritus, Jim Haught, and everyone in the newsroom in hoping that “the new owners will keep the Gazette-Mail a hard-fighting paper to improve life in West Virginia.”

In other news beyond the statehouse, settlement of a class action lawsuit filed in response to the 2014 Freedom Industries chemical leak moved closer to final approval during a hearing last week in U.S. District Court. Affected residents and businesses are still eligible to file claims for damages through February 21, 2018 at https://www.wvwaterclaims.com/.

Finally, in an unexpected move Jan. 26, 2018, the Public Service Commission of West Virginia issued an order approving the Pleasants Power Plant sale transaction with some conditions whose stated purpose is to mitigate risk to Mon Power and Potomac Edison customers.

On Jan. 12, 2018, the Federal Energy Regulatory Commission denied FirstEnergy Corp.’s request to transfer ownership of the Pleasants power plant to one of its regulated West Virginia utilities, Mon Power.

Under FirstEnergy’s proposal, customers of Mon Power and Potomac Edison, another FirstEnergy-owned utility in West Virginia, would have assumed all of the plant’s costs and financial risks, while FirstEnergy and its shareholders would receive a guaranteed revenue stream.

The Pleasants deal needed approval from both FERC and the PSC. FirstEnergy has until Feb. 12 to challenge FERC’s denial and request a rehearing. Stay tuned for updates.

Spending weekends writing and publishing this Capital Eye update is a challenge at times, but we live in challenging times!

Our challenge to you, our readers, is to step up and support WV Citizen Action with your memberships and donations. YOU are the reason we lobby for people-centered policies at both the state house and Washington.

With your support we’ll continue to fight for people and planet first! 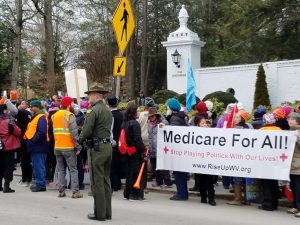 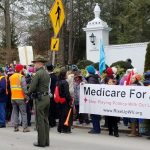 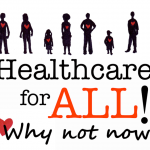