Rusty Williams is a cancer survivor, turned patient advocate and currently sits on the WV Medical Cannabis Advisory board along with medical professionals, pharmacists, law enforcement, addiction counselors, and others, giving this board a broad diversity of perspectives.

On Mother’s Day 2012, Rusty found himself in serious pain and was rushed to the ER. At the time the doctor said he was 99% certain that Rusty had testicular cancer. Rusty did not have health insurance, due to high costs and being self employed, it was not feasible for him to purchase healthcare insurance. Rusty was ready to give up. Rusty tried applying for Medicaid, but due to his cancer, he had a pre-existing condition and was denied coverage through medicaid. This was before the ACA went into effect. Finally, through the WV Catastrophic Illness Commission, Rusty was able to get the coverage he needed and to get the care he deserved. However, due to a 6 week wait period, his cancer spread to his lymphatic system. In an effort to combat the side effects of the chemotherapy, Rusty turned to medical cannabis for much needed relief. 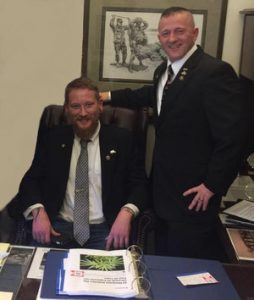 Which leads us to this year’s legislative session, on Wednesday January 10 the 2018 legislative session began. Steven Short, activist, recovering opiate addict, turned to cannabis to get off of opiates and now advocates for legalization of cannabis in West Virginia. Steven organized the “Make it Legal” rally outside of the state Capitol, with close to 100 people in attendance, including members from both the House and Senate, as well as candidates supporting this issue.

This years fight is focused on decriminalization of marijuana and amending SB 386 to allow the purchase and use of flower, in addition to allowing patients to grow small amounts of cannabis in their homes. As the law is written now, if you are caught growing cannabis in West Virginia, it is a minimum of 1-5 years in prison depending on the size of the grow, possession of anything over 14.5 grams is a felony, anything under 14.5 grams is a misdemeanor. Rusty believes we must advocate strongly for the decriminalization of marijuana. Right now it’s illegal for patients to grow; and counties and municipalities can opt out of the medical cannabis program.

“I want to get this passed because every patient that chooses to use cannabis as an alternative to pharmaceuticals should have the right to do so. Why should a patient spend all this money for something they could grow in their backyard. We are one of the poorest states in this country,” said Rusty.

What can we do to help? Call your lawmakers and get at least 5 of your friends to do the same.

Patients can help by sharing their stories, speaking truth to power and continuing to shine a bright light on this very important issue. Rusty says, “If you want to know how cannabis affects patients, you have to talk with patients.”

State of the State

Call Now to Save CHIP

The Foundation to Build a Proper Medical Cannabis Program in WV

Be Registered & Be Ready to Vote: WV Voter ID Law Now in Effect

The Hillbilly Poet: Crying Like a Baby & Other Poems
West Virginia Citizen Action Group Blog © 2015 Frontier Theme
Send this to a friend