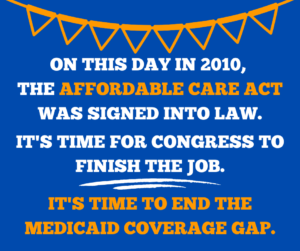 Twelve years ago, March 23, 2010, the Affordable Care Act was passed. Since then, many of us have been working hard to defend it from countless attacks from Congress, the courts and state legislators. The ACA stands as a pillar of our healthcare system, covering tens of millions and making healthcare better for well over one hundred million thanks to provisions like ending gender discrimination, discrimination against people with pre-existing conditions and arbitrary limits and caps on coverage which used to make healthcare inaccessible even for people who already had insurance. Here are some amazing data points I wanted to share.

Today, over 30 million people, a record number, have coverage under the ACA’s provisions through either private health insurance or Medicaid. Over 130 million people have gained protections from discrimination against pre-existing conditions and now have freedom from arbitrary caps or limits on coverage.

The ACA has brought the number of uninsured people in the United States to historic lows.

The COVID 19 pandemic laid bare critical shortcomings in our health care and health insurance systems and increased demand for ACA and Medicaid over the last year. Elected officials reacted with rescue packages and state policies to ensure that more people could access the health care they need to stay healthy and protect their families.  In 2022, a record number of people enrolled in ACA’s marketplace coverage thanks to extended enrollment periods and discounts on coverage in President Biden’s American Rescue Plan Act (ARPA).

President Biden and the new Congress must take action in the coming months to ensure the continuation of coverage and affordability, to lower drug prices, and to strengthen Medicaid and Medicare for the future so that everyone in America has equitable access to the quality affordable healthcare they need. They must pass a package that:

Over the past 12 years, more and more people have gained affordable coverage under the ACA, providing them access to preventive and acute care and helping improve the economic security of countless families. Let’s celebrate these successes, and keep working to bridge coverage gaps, so that everyone has the option of affordable health care coverage. 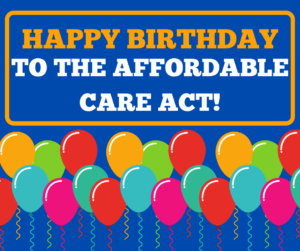