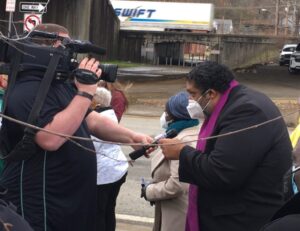 This past week’s extra-curricular activities out-shined many events inside the Capitol. A Moral Monday event by the Poor People’s Campaign landed on Senator Manchin’s doorstep in Charleston with the message of “pass a $15 minimum wage” to help folks currently earning poverty wages get out of poverty! Rev. William Barber, national spokesman for PPC was there in person to make their case with state leaders and labor groups, and others to tell their stories on the struggle to survive on a poverty paycheck.

Two significant actions on Thursday were supported by Citizen Action. We co-released new polling data that showed 63% of WV voters favored the gradual increase in the Federal Minimum Wage to $15/hr. To amplify that message, we sent a rolling billboard (below) around Charleston that day encouraging both our US Senators to support this increase. Ironically, this was the same day that Sen. Capito, with great fanfare, introduced a bill for a measly increase to $10. Why don’t conservatives want working people to earn a living wage? 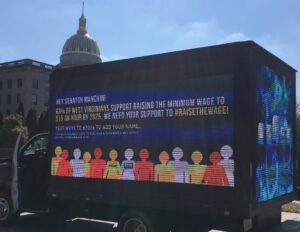 We cosponsored this rolling billboard and polling that shows 63% of West Virginians support a $15 minimum wage!

Another inspiring event on Thursday was the release by Reimagine Appalachia of a report on the impacts of clean energy transition programs for WV.The report by the PERI Institute concluded that the new administration’s proposals to build back greener with an emphasis of a Just Transition for affected workers and their communities would create over 40,000 jobs in WV over the next four years! Among the speakers at their event was none other than Josh Sword, President of the WV AFL-CIO.

We, The People, Speak to Legislature

Friday morning saw a first of its kind event, a People’s Public Hearing on HB 2598, which would exempt even more aboveground storage tanks from the regulations passed in 2014 after the Freedom Industries chemical release and the water crisis that resulted when it contaminated the drinking water of more than 300,000 people. WV-CAG and allied environmental groups were forced to organize our own public hearing after two House committees refused to do their job and hold one, citing the change 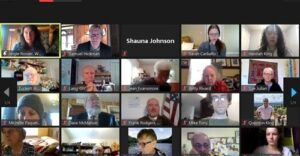 in House Rules and the Covid lockdown. Over 80 participants showed up and more than 30 testified against the regulatory roll back. The press responded with lots of coverage and we’ve shared the video with lawmakers so they’ll get the message. We won’t let them use Covid as an excuse to silence us!

While restaurants, schools and other public venues are opening up citizen access to the legislature remains very limited. One must have an appointment with a legislator or committee to even get into the Capitol and the House is not even using the video streaming equipment in place in the house chamber when committee meetings are held there, defaulting to just audio access online. The AFL-CIO weighed in on this lockdown problem with a letter to leadership this week demanding better access and threatened to take legal action unless the Legislature takes action to increase public access. How long will the Republican leadership stonewall public access to the People’s House?

So far, 1,263 bills have been introduced – 476 in the Senate and 787 in the House of Delegates. Luckily, most will never be placed on a committee agenda, let alone make it to the governor’s desk. However, this session is notable for the speed at which bills favored by leadership have been moving. This week we’re diving into health care and environmental bills that we’re watching and working with allies to move or oppose:

HB 2241 – Lead Sponsor Delegate Worrell. Creates an affordable Medicaid buy-in program. 🙂  In Banking and Insurance then Finance – Contact Chairman Westfall and ask him to put it on the agenda.

HB 2266 – Lead Sponsor Rohrbach.  Would extend Medicaid for postpartum moms from 60 days to 1yr.  This bill passed the House Health and Human Resource (HHR) Committee on the first day of the session, and is now in Finance. Contact Chairman Housholder and ask him to put it on the agenda.

HB 2611 – Lead Sponsor Pushkin.  Establishes a Minority Health Taskforce.  Stuck in HHR, contact Chairman Pack and ask him to take up the bill.

HB 2708 – Lead Sponsor Rohrbach.  Reduces insulin costs and caps out of pocket expenses at $25 for 30 day supply of insulin and non-insulin medication.  Stuck in, you guessed it, HHR, contact Chairman Pack and ask him to take up the bill.

Not So Healthy Bills

SB 334 – Makes any harm reduction program in WV jump through so many hoops very few to none will ever be approved. These programs are intended to help those suffering substance use disorders and to stem the spread of HIV and other diseases. Only one reference to Senate Health. Chairman is Maroney.

HB 2363, forces family court judges to assign 50-50 child custody and other ridgid regulations that don’t necessarily take into account the best options for the children. This bad bill is about to pass the House. It’s misnamed the “Best Interests of the Child Protection Act of 2021.”

SB 387, would require TANF recipients to submit to drug testing as a condition for receiving benefits. This is a flawed, ineffective and counterproductive proposal policy that will only serve as a barrier to enrollment. This is hitting the Senate floor Monday and up for passage Wed. Contact your Senators to oppose.

HB2667, introduced by Delegate Clay Riley, saves our tax dollars by implementing an energy efficiency savings program for assessment and implementation of energy savings goals for state buildings. Introduced last week and sent to House Energy & Manufacturing contact any of your Delegates on this committee and Chairman Anderson to get it moving!

SB30, the PPA bill, has been introduced by the Senate Judiciary Chairman Charles Trump. It would permit third-party ownership of all renewable and alternative generating facilities. This means you can get solar installed on your roof without going into debt by signing a contract to buy the power it produces. It does this by establishing Power Purchase Agreements (PPAs). SB30 is single referenced to the Senate Committee on Economic Development. Contact Chairman Swope and ask him to run it!.

E-Day is Online – This year the WV Environmental Council’s E-Day will be all online on March 10th. Join in with fellow advocates and activists to celebrate and agitate for our state and planet.

Thank YOU for your actions and your support! Of course there are dozens more bills we could write about and ask you to make calls on but we have to stop here, get some sleep and get up and fight again tomorrow. Your donations and checks in the mail give us the means, and support to keep on pushing for people-centered laws to make it to the finish line and to derail the awful ones. Now is the best time to renew or become a new supporting member! Thanks in advance!