It’s Over, for Now

The 2021 legislative session is now history, albeit a rather dark page as far as sessions go. We had some wins which, as Julie noted, can be counted on one hand. As with any session, killing off terrible bills took up a major chunk of everyone’s effort and there were successes on that front also.

Right up front we want to thank all of you who took time to weigh in and took actions in response to our (and other’s) Action Alerts! Your voice carries weight with those who need your vote at the ballot box so keep it up! Stay active now in the federal fight! 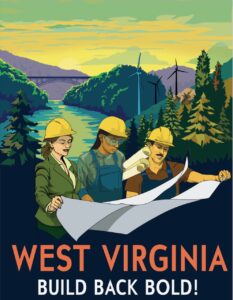 Before we get into the dumpster fire that was the 2021 Session, we want to emphasize the need for everyone to continue their advocacy. We suggest making a pivot to the vast potential good that our new administration is working up for our state and nation. West Virginians have a critical role in how big and bold this 21st century New Deal roles out.

Conservatives opposed the original New Deal too calling it, guess what? Socialism! Conservatives opposed Medicaid and Medicare too passed during president Johnson’s Great Society efforts. Again the cry of Socialism was thrown up as a roadblock. Their opposition essentially derailed Johnson from completing the third part of his New Society – providing a ‘middle care’ program, a public health plan for everyone else not covered by the first two.

Right now, president Biden needs EVERY vote in his party’s caucus to rebuild a country and economy devastated by Covid and decades of unfettered toxic capitalism. Our Senior Senator from WV, agreed to be one of the most conservative of the Dems, is our assignment. Senator Manchin needs to hear from all of us, early and often. He came through for us and the nation earlier with his vote for the American Rescue Plan.

Start out sending him a Thank You, then call back the next day to ask for his support of election protection in the For The People Act; then call back the next day on the Infrastructure effort called the American Jobs Plan; the day after that call him on supporting the evolved infrastructure to rebuild the Care Economy = the American Families Plan! Then call in for the THRIVE agenda that would create 50,000 jobs in WV, clean up the mess left by centuries of extractive industry and usher in a clean energy economy. Take a break over the weekend and start over next Monday

Isn’t it refreshing to be making so many calls FOR economic progress, justice, democracy and the planet? Joe Manchin’s DC number is 202-224-3954; put him in your phone’s contacts and speed dial him every day. He needs to hear from YOU as a concerned constituent. Be sure the Fat Cat conservatives are getting folks to call in opposition to everything.  Be sure to mention the name of your county of residence so they’ll know you’re not calling from California or New York ☺. You can make a huge difference in this effort by helping Senator Manchin do the right thing.

Below is a dive into the good, bad and just plain ugly of the session. Remember you can look up a bill’s technical wording and final passage roll calls on the legislative web page: https://www.wvlegislature.gov and click on bill status. A topical list of bills we followed (good and bad) is on our blog here.

Some Good Legislative Wrap-Up Articles from our local media outlets

You can practically count all the good bills that passed on one hand. These include:

However, defeating bad bills is also a victory. Bills we were glad to see expire include:

Other bad bills that passed in the final days of the session include a bill that requires doctors to give medically incorrect information to patients seeking abortion care (HB 2982).

Bad Ones Already Signed into Law

(To read a status review of 2021 bills by topic and subject, click here)

Wrapping it up and Counting on You!

We’re still picking up the pieces from the chaos of the session but already turning our focus to the awesome potential benefits of the Biden administration’s next proposals. As we mentioned at the beginning, your input into this in the next 60 to 90 days is critical to pushing our country to Build Back Bolder.

The For the People Act will roll back many states’ new attempts at voter suppression. The THRIVE agenda will create tens of thousands of new jobs in WV by helping us ‘Build Back Better’ and greener. Your green energy by the way of new and renewed member donations will give us the springboard to jump into these exciting campaigns! Thank you in advance for your support.