Given the current political climate, victory often takes the form of defeating bad bills. With that in mind, here’s an overview of what happened in these major issue areas — there were some victories, as well as some losses —and what to expect as we try to pick up the pieces and move forward.

We’ll start with some good news on the criminal justice reform front where advocates were successful at stopping both an extended supervision bill (HB 2257) that would have added up to 10 years of extended supervision for people with drug offenses after they completed their underlying sentence, including any period of parole; and a major rewrite of the state’s criminal code (HB 4006), that would have increased penalties for many crimes, adding more burdens to our already overcrowded prisons and jails.

The WV Criminal Law Reform Coalition was also successful in passing a bill (HB 4373) that would exclude fentanyl test strips from the definition of drug paraphernalia. By no longer including fentanyl test strips as drug paraphernalia, this bill will save people’s lives from overdose. Both the House and the Senate passed a bill (HB 4522) that would have automatically expunged the criminal records of people acquitted of criminal charges or against whom criminal charges were dismissed, however the House did not agree to changes made by the Senate in time for the bill to be sent to the Governor.

With regard to civil justice, there was also good news. A bill (HB 4394) that would have eliminated ‘deliberate intent’ liability, which allows workers to sue companies for additional damages beyond their workers’ compensation payments when employers ignore safety hazards resulting in workers injuries or deaths, died when it was not taken up by the House Judiciary Committee ahead of the deadline for bills to be out of committee in the house of origin. Perhaps, as a consolation prize, during the final week of the session, the Committee took up and passed a bill (SB 7) that would have eliminated an important West Virginia law that ensures that corporations that expose their workers, their customers or those living near their factories and plants to dangerous chemicals and other carcinogens that could lead to serious injury or death pay for medical monitoring. Fortunately, after being sent to the House floor, SB 7 was moved to the inactive calendar and never taken up for a final vote.

Eliminating these protections remains on the wish list of the powerful special interests that lobbied for the creation of the new intermediate court of appeals (ICA), and spend millions to elect their preferred candidates to our state Supreme Court. In order to put a check on their undue influence, it’s important that we have strong recusal (anti-bias) rules in place to avoid conflicts of interest and promote accountability when outside groups choose to weigh in on elections. 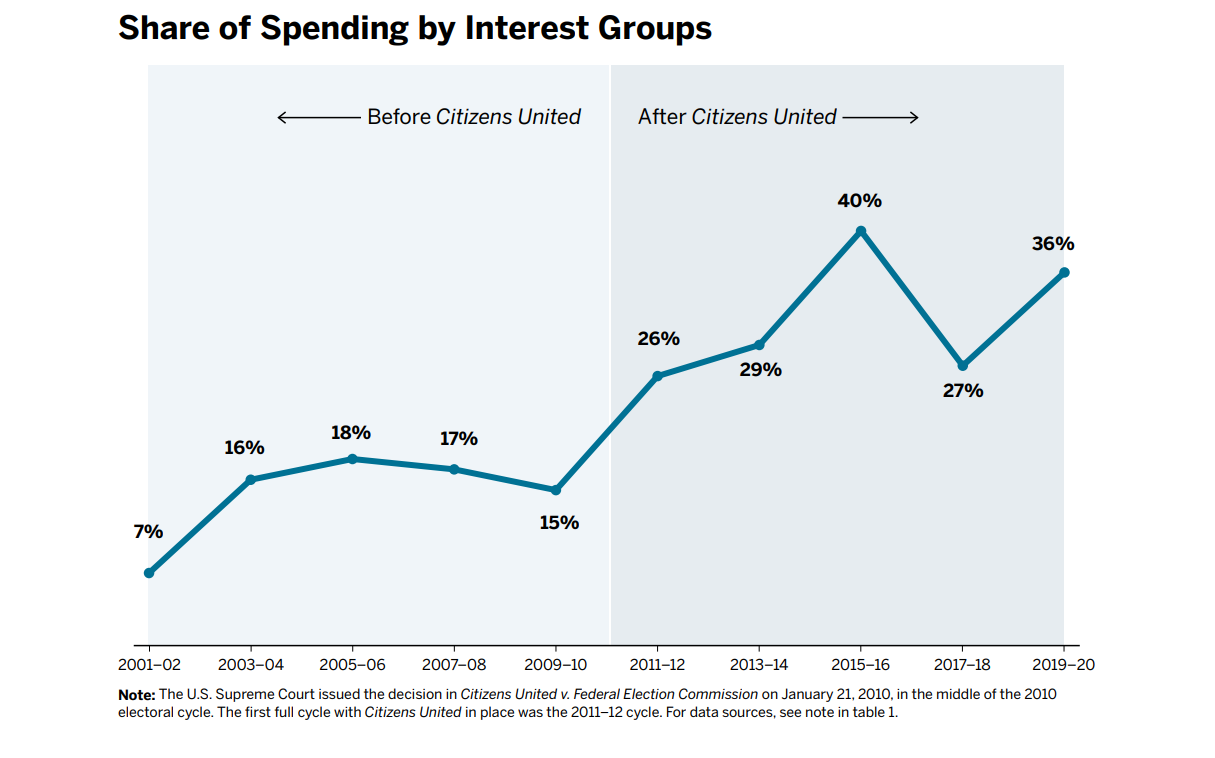 Share of spending by special interest groups in state supreme court elections before and after the US Supreme Court decision in Citizens United. Source: https://www.brennancenter.org/our-work/research-reports/politics-judicial-elections-2019-20

The Supreme Court is currently considering the rules that will govern when a judge on the intermediate court should be disqualified from hearing a case. Unfortunately, as proposed these rules leave it to the judge who is subject to a recusal motion to decide whether to step aside. To avoid the risk of bias, it is crit­ical that this decision as to whether a judge is and appears to be impar­tial not be left to the judge who has been chal­lenged. The public has an opportunity to comment on these rules and demand that they be strengthened to ensure that everyone is treated equally under the law. We’ll be back in touch soon with details on how to weigh in.

Unfortunately, like some of the bills described above, the clock also ran out on the two priority bills for the Health Care for All WV campaign, the Medicaid Buy-In bill (HB 3001) and the bill to cap the cost of insulin and other life saving equipment that diabetics rely on (HB 4252). However, this didn’t put a damper on the support and momentum behind getting these bills passed. We can build on the positive steps taken this year, to get these bills across the finish line in 2023. See Kim’s update for what comes next and how you can support Health Care for All WV’s ongoing work on these important bills. The Charleston Gazette-Mail and WV Public Broadcasting also have more on the health-focused bills that passed and didn’t pass this session.

Over the past several weeks we included actions and alerts on the various classroom censorship bills working their way through the Legislature. After the House Judiciary Committee determined the so-called “Anti-Stereotyping Act” (HB 4011) needed further study, they took up and passed a more extreme bill (SB 498) sent to them by the Senate. This happened just after midnight on the last day scheduled for committee meetings in the House. This antithetical “Anti-Racism Act” took up hours of debate in committee and on the House Floor, but ultimately fell short because Senate leadership decided to use parliamentary procedure in order to avoid another lengthy debate. This strategy backfired as the vote to concur with the House occurred six seconds too late. While it’s fortunate these bills met their demise along with other regressive, anti-civilberties and anti-LBGTQ bills (more here and here from our friends at ACLU of WV and Fairness WV), it’s telling that so many of these bills advanced while bills like the CROWN Act and the Fairness Act languished in committee. With local fairness ordinances protected for now, hopefully advocates will continue to make progress at the municipal and county level, in spite of the Legislature’s unwillingness to take action to ensure that all West Virginians are protected from discrimination.

Abortion bans – a ban on abortions after 15 weeks (HB 4004) and a “reason ban” (SB 468) – passed both house of the Legislature. HB 4004, which mirrors a Mississippi law currently under review by the US Supreme Court, failed, but SB 468 passed minutes before midnight on the last night of the session, and the Governor has signed it.

Legislators like Delegate Evan Hansen (D-Monongalia) argued, SB 468 is just another step to chip away at abortion access, and “a distraction from the real goal, which is to ban all abortion in West Virginia.” Hansen also called the bill’s supporters out for using people with disabilities as props, to justify what he said was “government mandated trauma.” 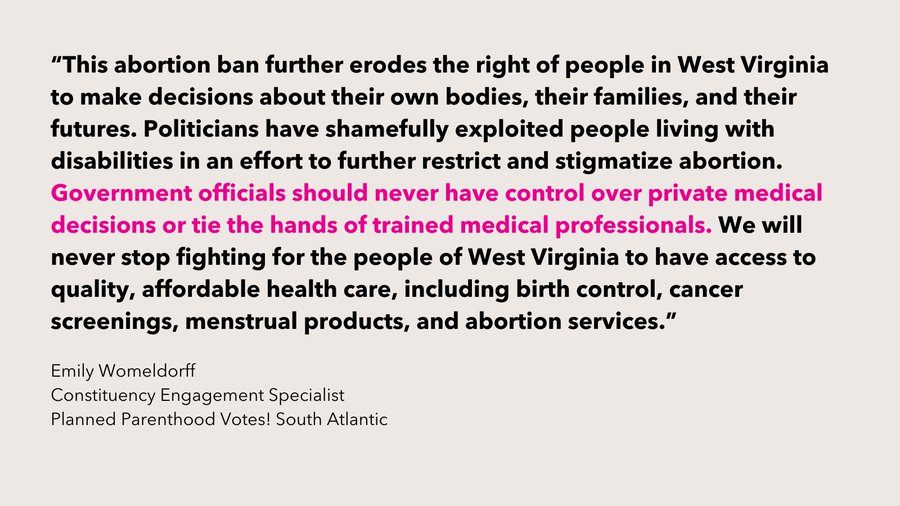 Meanwhile, Women’s Health Center of WV, the state’s only abortion provider, said in an email to supporters, “the future or abortion access hang in this country hangs in the balance,” with 26 states including West Virginia poised to further limit or ban abortion all together depending on the the US Supreme Court ruling. While we don’t know exactly what the ruling will be, we fully expect that it will create a patchwork of abortion access laws—differing from state to state. This will mean that state courts, state laws, and state constitutions will become even more important than they are today.

Thankfully some of the worst attacks on vital government services and benefits died, including the proposal to eliminate the personal income tax (HB 4007) and bills (SB 2 & SB 3) to reduce earned unemployment benefits for West Virginians who find themselves out of work due to now fault of their own. However, as the WV Center on Budget and Policy pointed out, the surplus shell-game and a flat budget mean we are failing to invest in critical needs such as making higher education more affordable, and ensuring that West Virginia families are more economically secure, even though we have the means to do so.

Unfortunately, three of the four of the bad election bills I wrote about here (and in an op-ed in the Charleston Gazette-Mail) as we headed into the final week of the session ended up passing. These bills eliminate an important check on the governor’s power to fill judicial vacancies (HB 4785), increase money in elections (HB 4419), and increase penalties for illegal voting (HB 4311). The latter is apparently part of a national trend to crack down on a crime wave that doesn’t exist and make examples of individuals who were just trying to be responsible citizens and fulfill their civic duty, but misunderstood or were unfamiliar eligibility requirements. On the bright side, the bill to criminalize the distribution of absentee ballot applications (HB 4293) did not pass.

Although some other bills that are ostensibly good passed, none of these bills eliminated barriers to or made voting more accessible for the majority of West Virginians. This includes bills to allow poll workers to work half days (SB 191), to prohibit non-public sources of funding for election administration (HB 4097), and to allow qualified first responders to vote an electronic absentee ballot (SB 4312). Although four bills — SB 200, SB 240, HB 2928, HB 4468 — would have allowed universal absentee voting modeled after the successful 2020 elections, none of these bills was considered by their respective committees. Perhaps the biggest disappointment was that the bill that SB 488, which would have restored voting rights to thousands of West Virginians on probation and parole, did not make it across the finish line due to an unrelated political dispute. 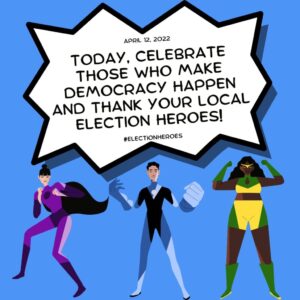 As we head into another election season, we are putting our own twist on the upcoming Election Heros Day of Action. In Charleston, we are supporting and participating in a Hidden Heroes event organized by CAG board member and volunteer, Sally Roberts Wilson, and Marian Alston, a volunteer leader with the WV Faith Table and our West Virginians for Democracy Coalition. This event will honor those people in our lives that inspired us to vote and become active participants in every aspect of our democracy. We will tie this into the importance of protecting and strengthening our American democracy against the autocracies that are rising around the world, now egregiously exemplified by the Russian war against Ukraine. We will also be using this event to bring publicity and  public attention to the new early voting location on Charleston’s West Side. More details will be forthcoming. We hope you will join us or sign up to host an event in your community here. (Partner and host toolkits are available here and here.)

“Voting rights is not a separate issue; it relates to all those other things: whether we decide to go to war, the economy, the Supreme Court. The bottom line is voting is foundational to every single one of those issues. What we’re talking about right now is a democracy — that’s the fight we’re talking about.”

— LaTosha Brown, Co-Founder, Black Voters Matter in an interview with the Washington Post

With the two key federal voting rights bills – the Freedom to Vote Act and John Lewis Voting Rights Advancement Act – stalled in the Senate, the fight for setting a national standard must continue. Black Voters Matter is proposing a One Million for Voting Rights campaign that will champion the country’s desire to see these two bills passed.

As with most of the other issue areas covered here, the highlight of the session may have been what didn’t pass, although the list of energy and environment bills that died includes bills good and bad. Carey Jo has an update on the notable deaths, as well as the good and bad bills that passed. You can also read alternative takes and recaps from our friends at the WV Rivers Coalition and the WV Environmental Council here and here. 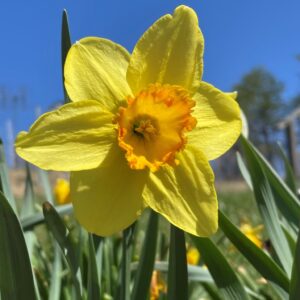