In 2019, Delegate Barbara Fleischauer took a group of West Virginians on a bus to Canada to buy insulin. This trip was followed by the introduction of the first Insulin Affordability Bill in 2020. I am the parent of a diabetic, and was invited to volunteer and advocate for passage of the bill. We had to work very hard to help senators and delegates understand why this bill was so necessary. We had to tell them that West Virginia is the state with the highest percentage of diabetics (16% who are diagnosed and approximately 45,000 who are yet to be diagnosed), and the highest rate of death because of diabetes and complications of diabetes. We showed them receipts of how the cost of insulin had gone from $600 a month before insurance in 2009 to almost $1500 in 2017. We told them our stories.

We were asking for a copay cap of $25 a month. The bill eventually passed, but with a $100 a month copay cap, which is still too high for most West Virginians. 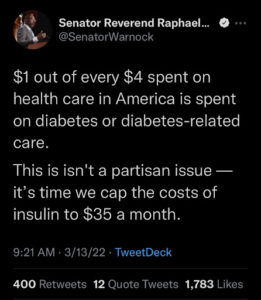 In 2021, we again asked for a $25 copay cap on insulin and copay caps for supplies like test strips, lancets, pump supplies, continuous glucose monitor supplies. That year was the height of the COVID pandemic and our bill didn’t get much traction.

This year HB 4252 was introduced. It would have capped insulin copays at $35 a month, supplies at $100 a month, and $250 every two years for a new insulin pump. The difference between this year and previous years was three years of education and building support for this bill. Delegate Dr. Rohrbach was the lead sponsor of this bill, and we were proud that it had so much bipartisan support in the House and Senate. There was a lot of light on this bill.

It passed the House on a near-unanimous vote! Then it was brought up in Senate Health two weeks before the end of session. It passed but was sent to Finance. Because a Health Committee amendment added PEIA to the bill, the bill was initially tabled in Finance, but was brought back later and sent to the full Senate. The Senate passed it, but with a last-minute amendment, the last day of session. The amendment, which added a provision that placed  limits on a  spouse’s ability to be covered by PEIA, had nothing to do with our bill. It was sent back to the House, but there was no time to discuss it or fix it, and the bill died.

Now, it looks like there will be a special session in the summer to find ways to make PEIA more affordable. We are hoping to bring this bill back up and hopefully get it passed then.

We want to thank everyone who called their representatives, told their stories, and spread the word about this bill. Together we will keep trying to bring this much-needed relief to the people of this state that suffer so much from this disease.

Another priority for the Health Care for All WV coalition was HB 3001, the Medicaid Buy-In bill. It would help thousands of West Virginians go back to work, get raises, take on more hours without losing their essential health coverage. It would fix the long-standing problem of the Medicaid Cliff. And it can be done using existing federal funds at no cost to the state.

Like the diabetes bill, we have been working on the Buy-In for two years, gaining more and more interest, and getting more bipartisan sponsors. This year, bills were introduced in both the House and the Senate. The rest of this year, leading up to the 2023 legislative session, we will build an education campaign around the bill, getting the word out, and asking folks to share their stories of being unable to raise the level of their incomes without having themselves and their families kicked off of Medicaid. If you have a story you would like to share, please contact Mariah Plante at mariah@wvahc.org