On Thursday, the Senate Judiciary Committee just passed a major campaign finance overhaul bill that would allow even more big money into a system that already favors the wealthy and special interests. SB 622 increases campaign contribution limits from $1,000 to $2,800 for candidates, to $5,000 for PACs, and to $10,000 per year for party committees. That means state and local elections that suddenly look more like the worst big-money congressional elections.

Contact your Senators and tell them we need more disclosure of political spending in our elections, not more money.

Although SB 622 increases disclosure in some small ways, like requiring PACs and entities making independent expenditures to file reports electronically, the overall effect of the bill would be disastrous for ordinary working West Virginians who struggle to have their voices heard above the special interests that try to buy our elections.

Additionally, SB 622 completely fails to address the flood of secret money in our elections. During the 2018 general election, independent expenditure political action committees registered in West Virginia spent more than $5.4 million to meddle in House of Delegates, Senate and Supreme Court races—twice the amount spent by outside groups to influence state level races during the last midterm elections in 2014. Although the spending itself was disclosed, its origin most often was hidden behind loopholes and money transfers. Many groups spending money on our elections listed no other contributors on their financial disclosures other than the sponsoring organization, while others filled our mailboxes and airwaves without filing a single report with either the Secretary of State or the Federal Election Commission.

Unfortunately, the Senate Judiciary Committee rejected an amendment offered by Senator Mike Romano (D-Harrison) that would have put an end to big money funneled through groups with secret donors and required disclosure of dark money by closing the “covered transfers” loophole. This loophole will continue to allow wealthy donors and special interests to funnel money through multiple PACs and organizations in order to obscure its origin.

We need more disclosure in our elections, not more money. If the West Virginia Legislature wants to discourage negative attack ads, give candidates the ability to respond, and inform voters about who’s trying to influence their votes, the best thing they can do is support transparency and require those who are spending money on our elections to disclose the source of the money. We deserve to know who is trying to influence our votes and our elected representatives, not be kept in the dark.

Contact your Senators and tell them to strengthen the transparency provisions of SB 622, and say NO to more money in West Virginia elections. 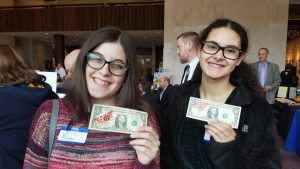 Tell Senators to Say NO to More Money in WV Elections