Wednesday the 27th is “crossover day”, when all bills introduced must pass out of their house of origin or be sent to the shredder. This is a much feared and anticipated deadline and will clear a lot of bad bills off our watch list, but also kill off many of the positive efforts of ours and our allies – sigh.

The 2-day teacher strike was surely the most remarkable aspect of this week at the Capitol. As the Senate was busy making the House’s (much better) version of SB 451 back into the horrible bill it started out as, teacher’s and school personnel leaders were on the Senate steps calling them all out on strike. The very next day, when the House received the Senate’s repeated version, striking teachers in the gallery stood up and cheered when the House, after an hours-long back and forth debate, tabled the bill “indefinitely”, essentially killing it. Just to make sure it stayed dead, labor leaders had everyone stay on strike one more day. Gazette/Mail reporter, Phil Kabler commented, “Future political science classes should examine it as a case study in how not to legislate.” Kabler also coined a new term for bills which appear out of thin air without any apparent deliberation (too many this session), as if by using this magic word: “ALEC-cadabra.” LOL! 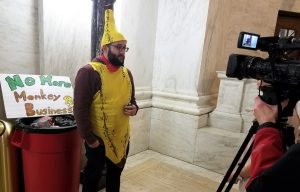 Governor Justice continued calling on lawmakers to pass his “clean” bill for a pay raise and that’s just what the House did with 89 yes votes (out of the 100 members) for HB 2730. Now all eyes on Senate leaders, especially President Carmichael, to see if they’ll blink. Senate Finance Chairman Blair, was quoted in news reports saying that he won’t pass a pay raise for teachers without charter schools included. WV Republican Party Chair said their party was against the raise now. Voters should remember this next year!

During the successful teachers strike last week, Putnam County was the only county in WV that decided to officially keep schools open, causing school personnel there to lose pay and risk other penalties.  But Putnam County workers stood in solidarity, and not a single school bus departed during the strike. Rise Up WV, in direct coordination with the WV School Service Personnel Association and other allies, is raising funds to replace lost pay for the Putnam County bus drivers and school personnel who stood up to anti-union and anti-public education forces in order to win this fight.  So far we’ve raised just over 1/3 of the $60,000 needed to cover all Putnam service personnel. PLEASE DONATE TODAY!

Putnam school service personnel can also apply for assistance at the above site.

HB 2519 passed out of its three committee assignments in the House without any of them having enough sense to kill the bill. Call your Delegate and tell them that teenagers, loaded guns and alcohol make a terrible mix and the 10+ million dollar price tag is an unaffordable, unfunded mandate for universities that will further hike up tuition for struggling students. This bill is up for House passage on Tuesday so call NOW!

Medicaid for Expecting Moms Moves Too

SB 564 is one of the bright spots that’s hopefully moving to the House this week after a Wednesday vote in the Senate. It’s a modest expansion of Medicaid coverage for more expecting moms and their newborns. We’ll keep you up on its progress; meanwhile, call your Senator to make sure it passes over!

In another ‘ALEC-cadabra’ moment last week, HB 3136 was “originated” in Finance Committee seemingly out of thin air. This is part of the raw power of being a committee chair – you can magically make a bill appear in your committee anytime you wish. This is the same tired bill that was killed off last year which would mandate that specific folks who receive Medicaid coverage must work 20 hours a week for the “privilege” of getting medical treatment they need. This might seem reasonable on the surface, but considering the lack of jobs, transportation and individual situations, what this really amounts to is a sneaky way to cut folks off of their lifeline to medical care. This bureaucratic barrier to getting needed health care will kill off many who get cut off. It’s another cookie-cutter conservative effort to blame the poor for the incredible wealth inequality in our society.

This “sneaky cuts to Medicaid” bill is up for House passage on Tuesday so make a call now to your Delegate AND send an email easily to your legislators – NOW is the time to urge them to vote no! Get ready to fight it in the Senate if it makes it through the House.

DEP rules bill (SB 167) is now in the House. It was rubber-stamped in their Energy Committee last week and is now pending in Judiciary. We’re hearing it won’t run there until next week so there is time to sign this petition to ask legislators to replace the 1980’s science by adding back in the DEP recommended 60 chemicals to monitor in our water. Watch for a notice for a public hearing on this bill.

Another surprise bill generated in House Finance is this week’s BIG WET KISS for coal. This one would cut severance taxes on coal by $60+ million per year, supposedly to make WV coal more competitive. Even conservative WVU economist John Deskins says this won’t work. He’s stated that even total elimination of the tax on coal would have little effect on its decline. HB 3142 is pure BS put out by King Coal every year to get yet another handout. It’s on schedule to pass the House by Wednesday so tell you Delegate to vote no on this $60 million handout to coal!

Everyone except big business and ALEC thinks spending $10+ million a year to add an extra layer of appeals courts is a stupid idea. Regardless, the majority (by one vote) in the Senate sent SB 266 over to the House last week. It would have failed had not one Democrat, Paul Hardesty, appointed by the governor to fill Richard Ojeda’s vacant seat, voted for it. It’s remarkable how conservatives are so against “big government” except when it fattens their bottom lines (see last week’s issue for details). This is another one to weigh in with your Delegates on; sign this petition TODAY! We know your list is getting long but hey, democracy is not a spectator sport. We all need to let our policy makers know what they should be doing to represent us. Elections are merely their job evaluations.

A really BIG THANKS to all of you who took the time to mail in a member renewal or extra donation to support your lobby team! We’ll be working evenings, early morning public hearings, and weekends (like writing this on Sunday before two organizing calls about the coming week) from now until March 9th at midnight when this session shuts down. Your calls to lawmakers make a big difference and your membership support keeps us going! It’s easy online at wvcag.org or in the mail to 1500 Dixie St, Charleston WV 25311.

Tell Senators to Say NO to More Money in WV Elections