(Charleston, WV) The WV Freedom to Vote Coalition has launched a Voter Issue and Action Survey as part of a campaign that aims to expand voter access to the polls by directly listening to West Virginians and collecting information about the challenges they have faced while attempting to cast their votes. The survey simply asks voters to provide as much detail as they are comfortable sharing regarding the obstacles they faced during the 2022 primary election. Coalition members; which include West Virginia Citizen Action Group (WVCAG), Rise Up WV, West Virginia Civic Engagement Table, WV Citizens for Clean Elections, and NAACP of Charleston; plan to utilize this data to pressure election officials to remove these barriers and advocate for improved poll worker training for future elections.

“Our decision to initiate this campaign presents itself in the wake of our nation’s collective reckoning with the prevalent circulation of the “Big Lie” conspiracy and an overall erosion of trust in electoral mechanisms. Consequently, we believe it is more important than ever to take the necessary steps to safeguard our democratic institutions and restore faith in the sanctity of our elections by learning about and calling attention to the barriers that force WV voters away from the polls,” said Richard Rose, an intern with WVCAG who is helping coordinate the project. “Thus, the Voter Issue and Action Survey is the first step in protecting our vote and ensuring that West Virginians know their voices are being heard and amplified to those in power.”

“We all want to experience a joyous sense of community participation in our elections,” says Sally Roberts, Chair of Rise Up WV. “Ensuring that we make the process of voting accessible to everyone ensures that all voices are heard and our democracy remains strong.”

Considering the nature of this initiative, the central focus in the early stages of this campaign is the distribution of the survey itself. The survey has been widely distributed on social media platforms, and WV CAG is in the process of launching a texting campaign in order to engage directly with West Virginia voters and encourage them to share their stories. Through this texting campaign, WVCAG will be reaching out to communities that are more likely to face barriers to voting, such as young and elderly voters.

Voters can complete the survey and share their experiences at tinyurl.com/WV2022WVElectionSurvey. 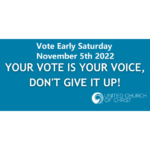 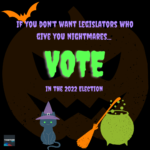 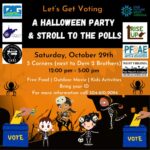 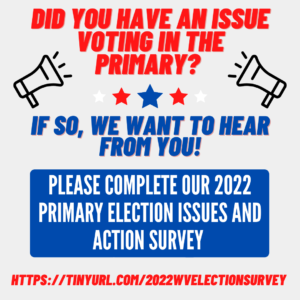