Week two at the legislature was a busy one. Meetings with potential bill sponsors, checking daily bills introduced (now totaling 876), monitoring committees as they take up and amend legislation. This is just the daily grind. Then there are the special events and actions we’re co-sponsoring and/or showing up for.

Tuesday was Kids & Families Day hosted by the Our Children, Our Future Campaign (OCOF). Our clean elections coalition’s Pro-Democracy, Anti-Corruption platform is one of the items on OCOF’s 2019 legislative agenda, and volunteers with WV Citizens for Clean Elections led an activity at the Culture Center that day to help promote the platform. (See Julie’s article for more on ways you can support the platform.)

After their lobby day, many OCOF folks attended the WV CAG/RiseUp rally outside Senator Capito’s office where we unfurled a banner saying “Stop Playing Politics With Our Lives” and sent a delegation up to her office to ask her to do as Sen Manchin had done and donate her salary during the shutdown to West Virginia food banks. (See Savanna’s article for more on how you can help end the shutdown.)

Tuesday evening was time for music and munchies with friends at the WV Environmental Council’s Legislative Kick-off. If you’re not getting the weekly e-mail alerts from their lobby team, sign up here. 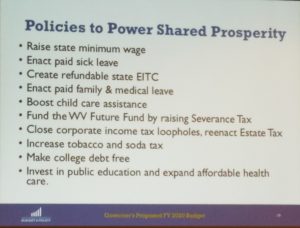 Wednesday at 7:30 AM we were at the WV Center on Budget & Policy’s Budget Breakfast listening to former WV CAG staff and current WVCBP Director Ted Boettner lay out the numbers on how bad an idea the Industrial Machinery and Inventory Tax giveaway is. Ted also lifted up a list of progressive policies for promoting our Shared Prosperity.

Water rules were on the agenda Wednesday for the two-hour “listening session” at the WV DEP’s office on water quality standards and the effects of revising human health criteria. WV Rivers Coalition and E-Council took the lead and we, along with many concerned citizens spoke out on upgrading the science behind the rules protecting our water from the 1980s into this century.

The Charleston’s Women’s March on Saturday was cold and wet but didn’t dampen the spirits of the participants from all over the state. WV CAG, Rise Up and WV Citizens for Clean Elections shared a booth. Facebook Pictures abound…

I’m trying not to use too many links to the Charleston Gazette/Mail since you have to subscribe to view more than a couple of their on-line articles. The good news is that our state’s independent newspaper is having an awesome 3 months for 99 cents deal for unlimited online access. Get this and read on!

While you’re at it, please remember that your financial contributions keep us going. Lobbying is one of our activities that is not funded by foundation grants, its supported by you, our loyal members, and we thank you! If you haven’t yet, please go online and renew your membership and if you can, add a little extra for our lobby efforts. We’re pounding the marble halls on a daily basis working to keep the forces of greed in check and advocate for people-centered, science, and fact-based policy. You can donate here, and, of course, the US Postal Service will deliver checks to us 1500 Dixie Street, Charleston WV 25311 mailbox with great reliability, too! Thanks in advance…

Bills to Watch & Other Updates

Below is a short list of the good, bad, and just plain ugly bills that we’re either promoting or trying to stop. We’ll feature new ones each week and bring old ones up when immediate actions are needed.

Immediate action is needed on HB 2010, an omnibus overhaul of our state’s foster care system which turns over the care for kids taken from abusive homes to a for-profit managed care corporation. What could go wrong when a whopping $350 million contract with $30 million in fees and profits is put out for bid? There is a public hearing on this bill Tuesday, January 22nd at 9 AM in the House Chamber. Contact Betty Rivard, retired social worker and citizen advocate, at bettyrivard@yahoo.com for details on how damaging this could be to our foster system and the children in it. Those planning to attend the hearing are meeting in the Capitol cafeteria at 8:30 AM.

HB 2459 fixes a long-standing restriction that prevents ex-felons convicted of drug offenses from receiving SNAP (food assistance) benefits. Drug offenders are the only class of ex-felons not allowed to receive SNAP. This bill would fix that so their recovery and reintroduction into society will hopefully be more successful. The bill has a good chance of passing with House Judiciary Chairman Shott as the lead sponsor.

HB 2169 would take the ‘bulls-eye’ off the next governor’s race by expanding the options for third parties to keep their ballot status. Right now only way for political parties to stay on the ballot is to get the required 1 % for their gubernatorial candidate every four years. This bill would expand that requirement to any statewide elected office like Secretary of State, Attorney General, etc. With independent voters increasing in numbers and minor parties expanding, it just makes sense to broaden their options. Call House Judiciary as Chairman Shott at (304) 340-3252 or e-mail at john.shott@wvhouse.gov and ask him to put HB 2169 on his agenda.

State grants for students seeking an associate degree in West Virginia stand to get some financial help from SB 1. It’s not perfect, but a step in the right direction. We’ll have to see what amendments are added during its consideration on the Senate floor before it moves to the House.

State Senator Richard Ojeda resigned from his state elected office the previous week to pursue his campaign for the US presidency, and was disappointed by the Governor’s appointment of Paul Hardesty, a lobbyist with a laundry list of clients including the Greenbrier Resort and other businesses owned by the Governor, to take his place. We’re also disappointed that Ojeda abandoned his post at the very beginning of a session where every vote is needed. We wish him well in his quest for the White House.

Even though other state offices are closed on this federal and state holiday, the legislature continues to meet on Martin Luther King, Jr. Day. (Actually, the session is measured by 60 consecutive days and towards the end they’ll be meetings on the weekends to complete priority legislation.) MLK Day is observed in the capital city by the Martin Luther King Jr. State Holiday Commission. This year’s theme is “unity has never meant uniformity.”