On Tuesday, about 50 people rallied at Senator Capito’s Charleston office, asking her to “stop playing politics with our lives,” end the government shutdown, and forget the border wall. The rally followed on the heels of a series of other anti-shutdown rallies in Morgantown, Parkersburg, and elsewhere.

The Charleston rally was co-organized by Rise Up WV, WV CAG, and Our Children, Our Future. Rally speakers Savanna Lyons, Jennifer Wells and Rev. Kay Albright emphasized how the shutdown does the most harm to the people who need the most support – seniors, struggling families, and kids. Thousands of low-wage federal workers are working without pay. Many domestic violence shelters have reduced or stopped their services due to the freeze in funding. HUD has not released its normal grant payments to landlords, meaning that less money is available to pay for for critical fixes to heat and water systems in low-income housing.  Funding for SNAP (food stamps) runs out at the end of January.  Although DHHR issued February SNAP payments early, if the shutdown continues past the end of February many families could go hungry. 1 in 3 West Virginia kids currently depend on SNAP to eat.

As of January 11, the shutdown had already cost $3.7 billion, and today the total cost of the shutdown may have already exceeded Trump’s ask of $5.7 billion to build a border wall.

Federal workers attended or sent anonymous statements for the rally, but did not speak publicly for fear of losing their jobs.  Read their stories in this coverage of the rally from the Charleston Gazette-Mail.

How you can help end the shutdown: 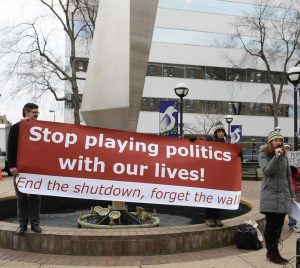