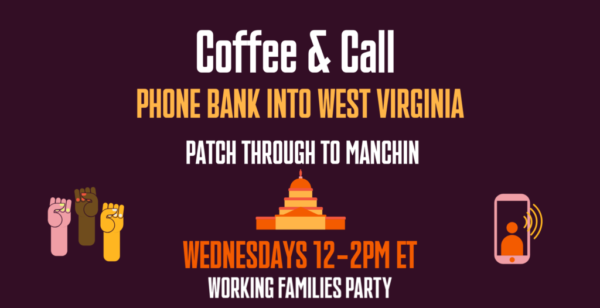 Patch through to Senator Manchin

At this phone bank, you will be able to patch through residents of WV directly to Senator Manchin’s office using the phone banking system called ThruTalk. Training will be offered to folks that are new to ThruTalk!

With over 400 state bills introduced by extremist lawmakers–including in West Virginia–aiming to put up barriers to vote just this year, we cannot afford to fail to pass this bill.

We need to push harder than ever to make sure the Senate does what it takes to finish the job, without letting Senate procedure get in their way.

This is Senator Manchin’s bill, so it’s critical that he knows how many of his constituents demand these foundational changes, and are feeling the urgency to get the Freedom to Vote Act passed, and to not let anything stand in the way.

Let’s keep raising our voices until we pass the most transformative voting rights and democracy legislation in decades. 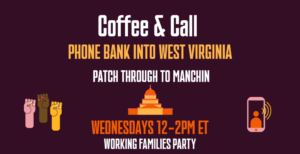