Can you make it? WED. 1:30PM: Delegate Sean Hornbuckle Accepts #ServerForAnHour Challenge, Will Serve Food at Giovanni’s Restaurant in Huntington to Highlight Need for Congress to End the Subminimum Wage for Tipped Workers 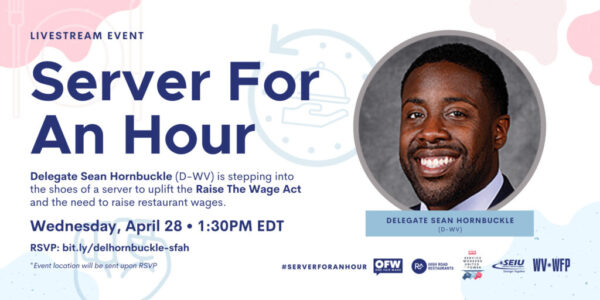 WED. 1:30PM: Delegate Sean Hornbuckle to Be A #ServerForAnHour to Highlight the Need for Congress to Pass the Raise the Wage Act, End the Subminimum Wage for Tipped Workers

HUNTINGTON, WV — Delegate Sean Hornbuckle will be a “server for an hour” at Giovanni’s Pizza in Huntington to draw attention to the struggles of restaurant employees earning the subminimum wage for tipped workers and being forced to tolerate inappropriate behavior from consumers, managers and co-workers in order to feed their families in tips.

Hornbuckle’s upcoming server for an hour action comes after One Fair Wage, representing millions of restaurant workers across the country sent a letter to members of Congress challenging them to live their daily experiences and be a #serverforanhour. The letter, which comes on behalf of nearly 6 million tipped workers and 14 million restaurant workers nationwide, points to “the backbreaking work” they do–all while working in fear of losing already-reduced tips because they must enforce public health mandates. They argue that the federal subminimum wage of just $2.13 an hour keeps them dependent on the same customers on whom they must enforce these rules – an impossible situation.

“The pandemic has made our hard jobs even harder.  After most of us were not able to receive unemployment insurance because we were told our wages were too low, we had to go back to work before we felt safe. We found that our tips have gone down, while sexual harassment has done up.  And research has proven that sexual harassment and racial discrimination in the restaurant industry are a direct result of the subminimum wage.  Yet we’ve heard that some United States Senators don’t want to give us the same basic fair wage as all other Americans and want to cut us out of the Raise the Wage Act — and keep this unfair, unjust legacy of slavery intact,” the letter reads.

The events are being supported by One Fair Wage, a national organization of restaurant and other service workers, and Ultraviolet, a leading national women’s group.

Over 140,000 workers are also sending petitions to Congress calling on members to pass the Raise the Wage Act, which would raise the minimum wage to $15 an hour and end the subminimum wage for tipped workers, and thanking those who have already voted in the legislation’s favor.

“We’re now writing to ask if you would join us for just one hour during your recess at a local ‘high road’ restaurant that has received support through the ARP to step into the shoes of a tipped worker as a ‘Server For An Hour,’ the letter continues. “Your leadership could help send a message to your colleagues in Congress that the racist, sexist subminimum wage must go — and should not be a part of any final legislation.” 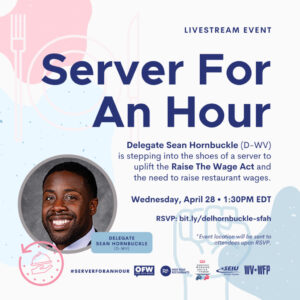