After quickly passing their house of origin and then clearing their first committee assignment in the other, two measures we oppose related to West Virginia courts slowed down. Now one has cleared another legislative hurdle, and the other is likely to be on the move again soon as we enter the final two weeks of the legislative session. Here’s a quick update and actions you can take to stop these power grabs and attempts to politicize the judiciary.

On Wednesday, the House Finance Committee took up and advanced SB 275, which would waste millions of dollars to establish an unnecessary intermediate court of appeals as a way to drag out appeals to the advantage of parties with greater financial resources. The bill will be up for a vote by the full House on Tuesday. We know special interests want this court to stack the deck against regular West Virginians, but the best chance to stop it is to convince Republican members of the House of Delegates who claim they want to shrink our state government and eliminate frivolous spending not to spend our limited tax dollars creating a court we don’t need.

Send a letter to your delegate(s) TODAY. Tell them, ‘Don’t expand state government with an intermediate court we don’t need.’ Reject SB 275!  (You can also look up your delegate(s) here and give them a call.)

Although special interests have long sought the intermediate court, primarily for civil appeals, as a way to drag out appeals and tip the scales in their favor, these interests will also have ample opportunity to spend big bucks to elect their preferred candidates to this new court. In West Virginia, we’ve seen firsthand the impact big money has in judicial elections. Recent Supreme Court elections have seen millions in spending. Most of this spending was hidden in the shadows because West Virginians current campaign finance laws allow groups that spend money to influence our elections to hide the identity of their donors. Without increased transparency of this spending the appearance and reality of even-handed justice is at risk.

Special interest groups spending big bucks on these elections see our Supreme Court as an effective vehicle to further their political, ideological, or financial agendas. Why would this new court be any different?

Courts are powerful and they matter. Their rulings impact our health, our freedom, and our bank accounts. We can’t let special interests have their way with our courts. Too much is at stake. Contact your delegate(s) today and tell them to vote NO on SB 275.

Unfortunately, SB 275 isn’t the only challenge to fair and impartial courts in West Virginia. The House of Delegate has already passed HJR 2, a dangerous power grab by lawmakers. HJR 2 proposes to amend the state constitution to make it so that no court in the state could intervene to protect the right to fair hearing of a public official facing impeachment, no matter how frivolous the charge or constitutionally flawed the process. It’s the job of the courts to hold all in our state accountable to the constitution. By voting to approve HJR 2, a majority of House members have made clear they believe themselves to be above the law.

As I wrote in a recent op-ed in the Charleston Gazette-Mail, the disaster scenarios write themselves. A governor vetoes a wasteful spending bill passed by lawmakers? Impeachment. A judge issues a decision the Legislature doesn’t like? Impeachment. Under HJR 2, legislators would have so much power that they also could remove any state official on entirely discriminatory grounds, such as for being gay or for being of a certain race.

Supporters of the resolution have responded to these and other very real concerns with little more than hand waving. Yes, they admit, all those things could happen under HJR 2, but the Legislature would never actually abuse its power in such a way. But why take that risk?

The drafters of our state constitution realized the importance of separation of powers. When one branch of government has too much power, the entire system can be undermined. Lawmakers blocking out courts completely from the impeachment process is akin to football players throwing referees out of a game — the results aren’t going to be pretty.

It’s not enough that lawmakers promise not to abuse their power. West Virginians deserve better than a government-by-honor system. We need real, clear separation of powers. HJR 2 threatens to tear that separation away.

Checks and balances between the three branches of government are vital to securing and protecting our rights as voters, business owners, workers, and members of the community. When one branch has too much power, it weakens the stability of our democracy.

Tell Senate Finance Committee members to protect the separation of powers and vote NO on this dangerous amendment to our constitution.

For our judges to be fair and independent, they must be free from special interest influence and able to curb abuses of power by the other branches. These power grabs and attempts to politicize our courts must be stopped. 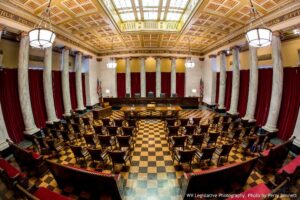 What A Taxing Week! 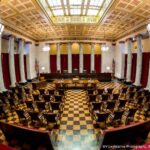 Courts and the Constitution 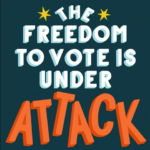