Fed Up Teachers Fill Up the Capitol

On Friday, county schools were closed in both the Northern Panhandle and several southwestern counties, and thousands of teachers again filled the marble halls of the Capitol wearing bright red t-Shirts with the words “Fed Up Friday” emblazoned on them. They were so loud you could hear the roar inside the chambers of both the House and Senate. Since their pay raise bill, SB267, was ‘parked’ in Senate Rules Committee, teachers filled Senate galleries with a sea of red. This so unnerved Senate leadership that shortly after convening members to consider a long agenda of other bills, they abruptly adjourned their morning floor session setting a 6PM evening time to reconvene. Meanwhile, a stage was being assembled on the river side steps of the Capitol for Saturday’s massive public employee’s rally sponsored by the WV AFL-CIO. Saturday’s rally was the platform used to announce a statewide walkout this coming Thursday and Friday. We can expect wall to wall teachers at the Capitol those two days also.

Since you’re reading this after the rally, you can still show your support for West Virginia’s underpaid teachers, service personnel, correctional officers and such by sending lawmakers a message that shortchanging public servants isn’t a West Virginia value. Sign this Working Families Party petition to let state workers know that we’ve got their backs. Click here to sign.

Free-dumb Bill of the Week – Concealed Carry on Campus

HB 4298 would force our state’s four year colleges and universities to allow anyone with a concealed carry permit to carry their weapons on campus properties. What could possibly go wrong when loaded guns are present at tailgate parties and boozy frat house events? Of course college and university officials oppose this as well as anyone who has half their brain function intact. However, our House Education Committee passed this lame bill and sent it to the Judiciary Committee where it has not yet been taken up for consideration. The wisdom of relaxing gun laws in the wake of yet another school shooting goes without saying. Contact members of House Judiciary and tell them we need to keep our colleges and universities gun free!

SB270, the Governor’s bill to finance repairs and maintenance of state park facilities by selling off their timber has been amended into a ‘pilot project’ targeting only Watoga State Park. This is ‘the camel’s nose under the tent’ approach to change public policy from ‘preserving’ our parks to ‘maintaining’ them for revenue. According to the WVEC’s latest update the bill may flounder in the Senate but the logging lobby may try to get it moving in the House.

We’ll continue to keep you posted. In the meantime, send a message through this WV Rivers Coalition action, and let the Senate Natural Resources Committee know that you oppose ANY commercial logging in ANY of West Virginia’s state parks!

Our state stands to lose a trusted source of independent journalism depending on how the bankruptcy courts settle the sale of the Charleston Gazette-Mail. The newspaper won a Pulitzer Prize last year for its investigative reporting on how ‘pill dumping’ in West Virginia by national drug firms helped fuel the opioid crisis in our state.

Environmental reporter, Ken Ward, was singled out for wishful ‘pink slip’ by a coal industry lawyer in comments reported by the Washington Post since the announcement of the newspaper’s sale.

You can sign onto a support letter here that is being circulated to keep it from being sold off to a media investment group that fails to meet the high journalistic standards set by the Gazette. Even if you live out of town you can subscribe and get your paper in the mail. The Gazette-Mail has served West Virginia and her people well for decades. We need to support the kind of independent journalism that the Gazette-Mail provides, in hopes that it will be able to continue to provide this essential service in the future. You’ll notice that every update usually has links to several of their articles. This is real news folks!

It’s a good day when the mail comes and several of our readers and members have posted a small contribution to help us keep fighting for you at the Legislature. These modest memberships and donations are heartening and really do help us keep the lights on and the phones working! Please take a minute and address an envelope to 1500 Dixie Street, Charleston, WV 25311 or even easier click here to support your Citizen Action Group online. Your CAG team thanks you in advance! 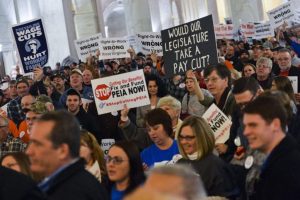 “Fed Up Friday” Wraps Up Week 6

SNAP Work Requirements Headed for a Vote in the House