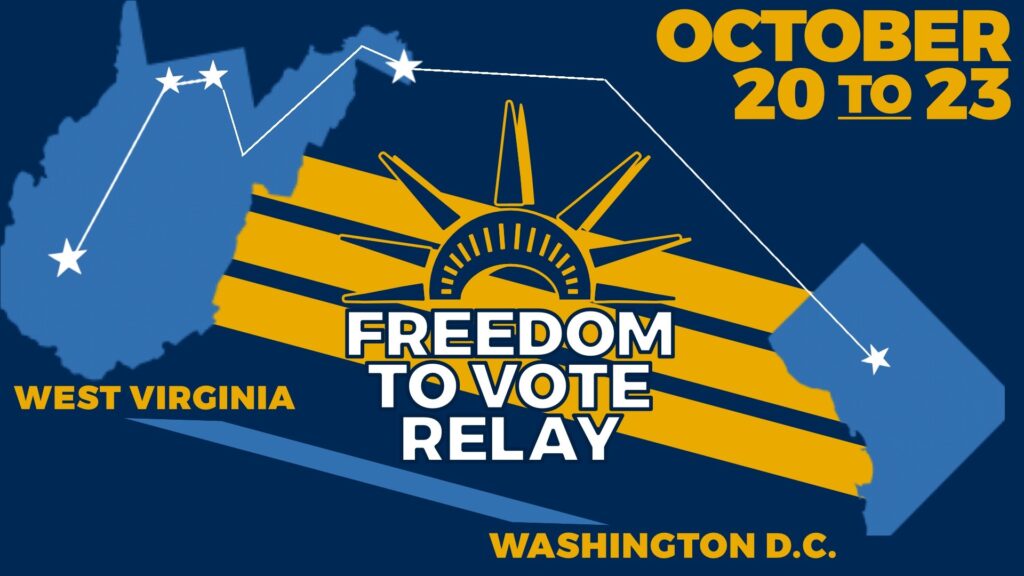 Join us at the Charleston Capitol, 1900 Kanawha Blvd. East, Charleston, WV 25305 at 9AM.
The freedom to vote is one of the most powerful tools we have in our democracy, and it’s under attack.
Join West Virginian’s in a caravan from Charleston to Charles Town. We will be making stops in Charleston, Fairmont, Morgantown & ending in Charles Town WV with a Freedom to Vote Relay Kick Off at 5:30PM. Speakers, Food & Music.
For people joining the Freedom to Vote Relay, runners, walkers and bikers will meet in Harpers Ferry on October 21st at 8:30AM at “The Point” in Harpers Ferry along Shenandoah St. We’re relaying from West Virginia to D.C. to protect our freedom to vote. Join the fight by signing up for the Freedom to Vote Relay beginning in West Virginia on October 20 and rally at the finish line on October 23rd at FreedomtoVoteRelay.org.
Extremist politicians have introduced over 400 bills nationwide to suppress our vote and are gerrymandering states to disenfranchise millions of American voters.
We must fight back by passing the Freedom to Vote Act, the John Lewis Voting Rights Act, and the DC Statehood Act to ensure equal access to the ballot box for every eligible voter.
RSVP HERE 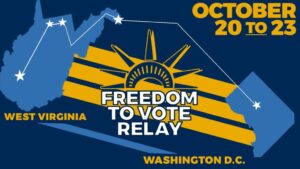