Our governor’s State of the State speech last week seemed more of a re-election rally than serious look at what we’ll be facing in the new decade. Phil Kabler’s Statehouse column gives a much needed reality check on the problems facing our state as it lurches into this century’s ‘Roaring Twenties’.

Since this is the second year of the two-year bicameral legislature, a whole slug of ‘carryover’ bills from 2019 flooded the first day of session. By Friday the Senate had 310 and House a whopping 657 bills introduced. Fortunately, the vast majority of these will not move but one must always be vigilant for a committee to take one of the outliers up without much notice.

History tells us that during major election years not much in the way of major legislation is considered. That being said there is still a lot of damage that can be done (and opportunity to move good bills). So get ready for a topsy turvy couple of months that will hold many unanticipated surprises. Meanwhile, see the toolbox below to get geared up for battle.

How does a concerned citizen keep track of all the gyrations of the legislative session and effectively communicate with their lawmakers? It isn’t easy but there are several outlets and resources that are helpful in becoming an informed and active participant in our democratic process.

We have several news outlets which do a fairly decent job of covering the legislature. The top on our list for broadcast is WVPB which airs a daily Legislature Today show on radio, TV and online. On radio and web is Hoppy Kerchavel’s Talkline on Metro News Network. Hoppy’s radio show broadcasts live from the capitol most days during the session. Hoppy is unabashedly conservative but let’s both sides have their say. Brad, Metro’s statehouse reporter posts lots of up to the minute articles on the web.

Of course the Charleston Gazette/Mail and their veteran statehouse reporter Phil Kabler are a great newspaper source. Kabler has a Sunday column that digs deeper into the underbelly of WV politics. The Gazette/Mail is a struggling independent newspaper, a rare breed in this age where media conglomerates are buying up and dumbing down our news. They have a special 99cent introductory on-line subscription which allows unlimited access to their web portal. This would give you access until the end of the session.  Give them a try!

We try to post relevant news links from these and other outlets on our website each day, so head over to wvcag.org to check out the latest news related to our issues and happening at the legislative session.

Our WV Legislature’s web page is a must for those who need the nitty gritty on bill language and process. You can watch or listen to floor sessions and committee meetings live on their Video/Audio link under the House and Senate headings. Folks can find the phones and emails for their lawmakers under the same drop menus. Daily agendas for most committee meetings are posted under the committee links.

Under ‘Bill Status’ you can type in a bill number to see where it is in the legislative process, read or download the bill itself, and set up a bill tracking list (complete with personal password) which is automatically updated as bills move through the legislative process. The ‘Bulletin Board’ is a good place to start for links to lots more info. Check it out, you’re paying for it with your tax dollars so why not use it?

Who are my Local Lawmakers?

If uncertain which lawmakers represent your area type in your address in the Open States search box. This works for most legislators if they haven’t been changed since the last election. Recent changes may not be updated. For the most up to date info call your local County Clerk or revisit the Legislature’s website once you determine your House and Senate districts.

Since you’re reading this you are already plugged into our Citizen Action feed. There are many others who dive deeper into specific areas of social, economic, environmental, racial and civil justice. We’ll be linking to their posts for their expertise as we explore the bills in future updates. A list of Citizen Lobby Days at the capitol for health reform, environment, inclusion and other focus areas are listed on our webpage event calendar. Stay tuned!

As the old saying goes, it’s impossible to get away from either of them, unless you have really well funded lobbyists and deep pockets. Then at least the taxes part comes into play. Last year King Coal got a 60 million dollar a year tax break on severance taxes (Didn’t see any uptick in coal jobs? Neither did we). This year everyone from the governor, Senate & House leadership and big business wants to eliminate the personal property tax. Not on your personal car, truck or home, but on their business inventory and equipment to the tune of at least $130 million! WV Center on Budget & Policy points out this is more than the amount that the state budget is already into the red this year. But not to worry, eliminating this ‘burdensome’ business tax will magically make new business flock to the state and pay more taxes than lost by this giveaway. If you believe that whopper, we’ve got a great deal on a bridge in Brooklyn.

Another problem with the elimination of this revenue stream is that it gives away tax dollars which go directly into our county’s budgets to pay for stuff like public schools, police, emergency response etc. Ah but somehow (that’s never quite explained) the counties will be ‘made whole’ after losing this hundred plus million in local revenue. Trust us, they all say.

Two things will make this proposal a heavier than normal lift. Since property taxes are written into the state constitution, it requires a constitutional amendment to make changes. The proposed amendment must pass both House and Senate by a ⅔ majority, and then be approved by the general public in the next general election in November. This will be one of the major fights of the session. Tell you lawmakers to ‘Just Say No’ to yet another big business tax giveaway!

Healthcare for All Agenda Released

WV CAG is proud to be a partner in the Health Care for All campaign building on the successes of past legislative sessions to expand health care in WV. The 12-point agenda contains common sense reforms that can be enacted this year to ease the suffering of our fellow West Virginians struggling to access affordable health care.

Some of these are: reducing the high costs of Rx drugs and specifically limiting co-pays on Insulin; creating buy-in options for Medicaid and CHIP; and paid family and medical leave. These are steps we as a state can take now while the gridlock in Washington prevents any progress until after the election.

Of course, Improved Medicare for All is the ultimate goal for our state and nation. However we must continue to make progress now as we keep our eye on the prize of universal health coverage. Contact your lawmakers and ask them to support the Health Care for All agenda. Watch for future updates on specific bills as they are introduced.

On the sixth anniversary of the discovery of the Elk River Chemical Leak, the House Energy Committee rolled out a bill which exempts even more oil and gas tanks from the provisions of the Aboveground Storage Tank Act. These are barrels/tanks located in zones of critical concern (ZCC) and would mean that thousands of gallons of brine (which can contain harmful chemicals), near public drinking water source water, would be unregulated.

HB 4079 will likely be taken up early this week and passed out of House Energy committee, which is mostly a wholly-owned subsidiary of the extraction industries.

Tell your Delegates you want to continue protections from tank spills near water intakes and to vote no when this bill comes to the floor. WV Rivers action alert is posted here.  Also subscribe to the WV Environmental Council’s Green Action Alerts and stay informed on all issues affecting our environment.

Adele Morris, an economist with the Brooking Institute, is the keynote at the ‘Leaving No One Behind: Ensuring a Fair Transition for Workers and Communities’ a public event on Febuary 5th at the Charleston Civic Center. Adele has written extensively about the need for coal miners and coal communities to have a just transition as our nation moves to a low-carbon economy. This program is sponsored by the West Virginia Center on Climate Change. The event is free, but registration is required.

This should be an outstanding community discussion on an issue that is likely to have a significant impact on West Virginia and its citizens as we deal with climate change.

Thank You for Your Support!

We work extra hard during the session to make sure our supporters have the information and contacts they need to make WV a better place for everyone. This means longer hours and more expenses for staff and materials. In addition to your policy support, your financial support is also essential. We want to thank those who have responded to our December mailings and renewed their memberships and even put in a little extra. Since this Capital Eye Update goes out to everyone, we’re hoping that everyone will pitch in with a membership contribution. Thanks in advance for your support!

2020 Session Kicks off with a State of the State Yawn

This Session, Join Us in the Fight for a Democracy that Works for Everyone

Say No to Removing Regulations of Tanks Near Drinking Water Intakes

Join us for a VIRTUAL Citizen Lobbyist Training! 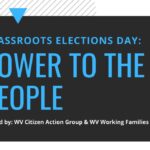