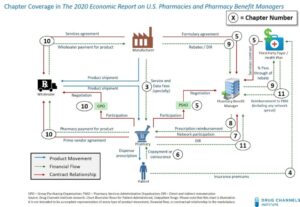 The history of American healthcare reforms contains an important message for the fight for Medicare for All: don’t stop now.

“…There’s a common joke among single payer advocates that America’s healthcare system is not a “system” at all, in that its pieces don’t function or connect to each other particularly well, and that it has come together relatively ad-hoc, rather than being intentionally designed. This is certainly accurate in some respects. When you think about it, from providers to insurance companies to drug manufacturers the majority of the actual provision of healthcare in the United States is done by an unaffiliated miasma of private companies. This miasma is constrained only by increasingly underfunded and deregulatory federal agencies only capable of disciplining each company retroactively through fines and litigation. If you want to understand how absurd this is, take a look at the below chart from the Drug Channels Institute looking at the companies involved in a relatively straightforward part of the healthcare system, filling a prescription. Keep in mind that for each industry listed below, a major driver of an individual company’s profitability is their ability to extract a surplus value from its business with companies in the other industries on this chart…”