Winter is coming, and that means the legislative session is just around the corner.

With so much time and energy focused on federal issues, it’s been hard to think about the legislative session — and, especially looking back at the 2021 session it’s hard to see much good coming out of what’s been dubbed “the Bad Idea Factory.” However, we had a few wins, and especially in the current climate, sometimes victory means holding the line and not losing ground.

As 2021 comes to a close and we head into a new year and another legislative session, here are some issues we expect to take up time and attention under the dome.

Courts/Access to Justice – Big changes are coming to West Virginia’s judicial system, after the passage in 2021 of SB 275, which established a new intermediate court of appeals that will review most trial court decisions before they reach the state Supreme Court. SB 275 also made other significant changes to the process of appealing objections to workers compensation claims that attorneys for injured workers say will politicize the process and deny or delay justice for their clients. These changes have been long sought by corporate interests, but their efforts to undermine access to justice for regular West Virginians have no bounds. Among the items still on their wish list is restricting access to medical monitoring when someone is exposed to a dangerous toxin or defective product. While it may take years for some diseases caused by that exposure, such as cancer, to develop, those who are exposed to the dangerous toxins need to have regular medical monitoring so that treatment can start as soon as any illnesses are found. Refusing to allow medical testing until disease occurs could be a death sentence. Early detection allows for early treatment which saves time, money and lives, but greedy corporations, the same ones pushing for the changes to our water quality standards described below, want to prohibit medical monitoring claims until someone gets sick, defeating the very rationale for these claims.

Health Care – Building on past successes capping insulin copays and adding adult dental coverage to Medicaid, the WV Health Care for All coalition has a new agenda that they will be working to pass in the upcoming session to ensure that all West Virginians have access to quality, comprehensive affordable health care. Visit https://www.wvahc.org/health_care_for_all  for more on the 2022 agenda and how you can get involved.

Racial Justice and Non-Discrimination – Although bills to prohibit hair discrimination and to protect members of the LQBTQ community from dicrimination in employment and housing stalled in previous sessions, advocates for the CROWN (Create a Respectful and Open World for Natural Hair) Act and the Fairness Act aren’t giving up the fight. They’ve also been making significant headway at the local level. In the months since the 2021 legislative session ended, at least four cities (Charleston, Morgantown, Beckley and Lewisburg) across the state have adopted CROWN Act ordinances which ban discrimination against based on hairstyles associated with race, such as natural Black hair or dredlocks. In July, South Charleston became the 15th city in West Virginia to ban LGBTQ discrimination. This year, Charleston and Morgantown also passed bans on conversion therapy, a pseudoscientific practice where a medical provider attempts to change someone’s sexual orientation or gender identity.

Reproductive Justice/Bodily Autonomy – On December 1, the nation watched as the US Supreme Court heard oral arguments in a case that directly challenges Roe v. Wade, the precedent setting case that has protected reproductive freedom for millions of Americans for nearly 50 years. If the Court overturns Roe, half the states in the U.S. are poised to ban abortion entirely including West Virginia, and ultra-conservative legislators are chomping at the bit to impose further restrictions on abortion access in West Virginia after the Court refused to halt a Texas law banning abortions after six weeks from taking effect. This is a red alert moment for reproductive freedom. The right to decide if or when to have a child is essential to a person’s ability to make highly personal decisions about their bodies and their futures. It is essential for social, economic, and racial equality in this country. 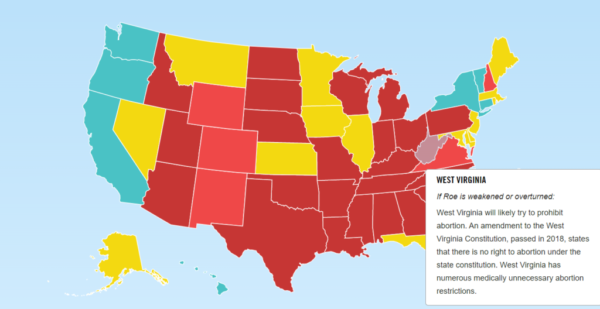 If Roe v. Wade were weakened or overturned, abortion rights would be protected in less than half of the U.S. states and none of the U.S. territories. Use this interactive tool from the Center for Reproductive Rights to learn more. https://maps.reproductiverights.org/what-if-roe-fell

Tax and Budget – During the 2021 session, WV CAG was part of a coalition of groups that helped defeat a bill to eliminate West Virginia’s personal income tax. The proposal would have overwhelmingly benefited the wealthy by replacing the income tax with higher sales taxes that would be a net tax increase for low and middle income families, while also blowing a huge hole in the budget that would have resulted in huge cuts to critical programs and services. Although, people power played a major role in defeating the income tax repeal, disagreement between the House and the Senate was also factored in, so look for it’s return in 2022. 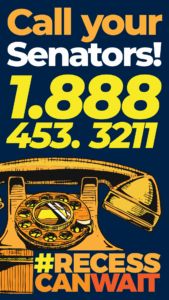 bill (SB 565) that would have eliminated the most popular days of early voting, gutted automatic voter registration and start the process of removing voters from rolls after two years (instead of four) if someone hasn’t voted. With voting rights under attack around the county — this year, 19 states have enacted 33 laws that will make it harder for Americans to vote — we fully expected to see this proposal again in 2022, if not sooner. It’s important we remain vigilant and prepared to and ready to mobilize against measures to restrict access to voting in West Virginia. These threats to our freedom to vote make it critical that Congress set national standards to ensure that all Americans have equal access to the ballot ahead of the 2022 elections. Passing the Freedom to Vote Act is our best opportunity to respond to these threats to our democracy, further voter protections, strengthen election integrity, reign in dark money, and end partisan and racial gerrymandering. Call Senators Machin and Capito today and urge their support.

Water Quality Standards – One of the anticipated policies that will be up for debate is a WV Department of Environmental Protection rule making revisions to the state’s water quality standards. The proposed changes are part of a second round of revisions to the human health criteria, the portion of our water quality standards that protect our health from dangerous pollutants like cancer causing toxins, chemicals known to cause birth-defects, and poisons like cyanide. As proposed, the rule would allow more toxins in our drinking water sources, but also creates a loophole for polluters to discharge even more toxins in our water with less public involvement. Before the rule goes before the full Legislature it will be considered by the Legislative Rule-Making Review Committee, which can approve, disapprove or amend the proposed rule. The action by the Committee will set the tone for what happens during the legislative session. To keep up with the latest, sign up for water policy updates from our friends at the WV Rivers Coalition.

Make sure you are subscribed to our Action Alerts to stay up to date on these and other issues starting in January. Sign up at wvcag.org/action-alerts-signup.