All but One in WV’s Delegation Voted for Tax Breaks for Rx and Insurance Co.s,
Higher Health Care Costs and Service Cuts for WV’s Working Families

Charleston, WV – Citizen Action Group co-released a report today outlining the costly consequences of last December’s tax law that the Congressional Budget Office (CBO) predicts will add nearly 1.9 trillion to our national debt. “This huge giveaway to Wall Street, foreign corporations and billionaires in the tax law overshadows the pittance doled out to working families,” commented Gary Zuckett, Executive Director of WV Citizen Action. “Even worse, this self-inflicted deficit is now being used as an excuse for new attacks and cuts to our health care and other social programs that aid working families and low-income citizens.”

The new Tax Cuts and Jobs Act became law after passing the House and Senate late last year despite widespread constituent opposition and record-low public approval ratings. All of WV’s Congressional delegation except for Senator Joe Manchin voted for this ‘bait & switch’ bill.

The new law provides about $1.5 trillion in tax breaks to individuals and corporations with about two-thirds going to the richest 20% of households this year and nearly 83% of tax benefits going to the richest 1% by 2027 when the law is fully implemented. The law also permanently cut corporation’s tax rate from 35% down to 21%, gives companies who offshore profits a discount on taxes and eliminates some taxes on foreign profits.

Today, WV Citizen Action released a new West Virginia report by Americans for Tax Fairness and Health Care for America Now  detailing the affects of the tax cut package on families in West Virginia and compares that with the tax benefits that health insurance companies and prescription drug manufacturers receive under the same law.

According the report’s findings:

Most health industry companies including the largest pharmaceutical companies like Merck and Pfizer will get massive tax breaks, but will not pass these on to their employees in the form of wage increases or bonuses. The same is true for insurers like UnitedHealth, which will receive $1.7 billion in annual tax breaks but likely not pass these benefits on to customers in the form of lower costs.

On the contrary, because the corporate tax cuts in the new law are paid for with cuts to the Affordable Care Act (ACA), millions will actually see increased costs for coverage. Repeal of a key provision of the ACA in the tax law will increase the number of uninsured people in our state by 69,000 and drive up premiums by as much as $2,100 annually for some ACA enrollees.

“Tax breaks for the rich and corporations, especially at this scale, are an expensive luxury. That money has to come from somewhere,” said Zuckett. “In this case, Republicans have cut the ACA—a law they want to get rid of anyway—to pay for a large portion of the tax cuts which means that the cost really gets shifted to consumers and states in the form of higher premiums and rising numbers of uninsured people that put a burden on our state’s resources.”

The only way to fix this looming catastrophe is the repeal of the new tax law. This must be done in order to protect health care, education and public services from more cuts. This is a heavy lift in the current Washington climate. However, there is an election in November and more citizens are becoming activated now than any time since Vietnam. We’ll be working to make sure they “Remember in November!”

“Instead of more tax breaks that reward prescription drug companies and insurers for decades of gouging customers, our representatives in Congress should be making corporations pay their fair share of taxes to expand health care, make insurance and prescription drugs more affordable, and protect education, Medicaid, Medicare and Social Security,” concluded Zuckett. 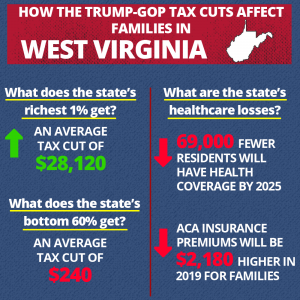