Summer came early to the Kanawha Valley again this year. It seems like plants and critters were at least a month ahead of their usual growing season. I heard spring peepers in early March and saw the first few fireflies back in April with some spring flowers blooming already in February. Climate change has them all confused.

So it was fitting that the last Saturday in April was a scorcher with temperatures in the 90’s, as we gathered in Charleston for a ‘sister’ march to the People’s Climate March. Despite the heat, we nearly 400 folks from around the state assembled at the Kanawha County Board of Education office and marched to a rally at the state Capitol in solidarity with the national march in DC.

Several co-sponsoring groups had displays and booths including Citizens’ Climate Lobby (CCL) and the West Virginia Chapter of the Sierra Club. CCL unveiled their new climate timeline display and their affiliate, Mid-Ohio Valley Climate Action brought their banner and led the march to the Capitol. Several members of the WV Electric Auto Association had their wheels on display and were available for questions.

The banners at the Capitol read: Climate – Jobs – Justice. West Virginia is ground zero for climate justice since we blow up our mountains and frack our shale to power the mid-Atlantic states with fossilized energy. Its past time we organize for climate justice and a ‘just transition’ to renewable energy solutions that will help bring our state’s economy into the clean energy, job creating future. WV Citizen Action is hosting monthly climate justice calls to bring folks together toward this end. Let us know if you want notice of these or of a climate justice group forming in your area. 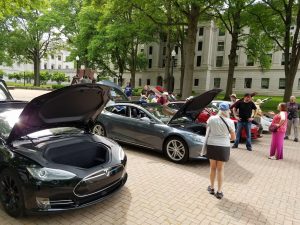 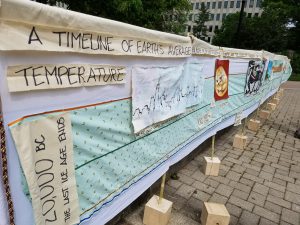